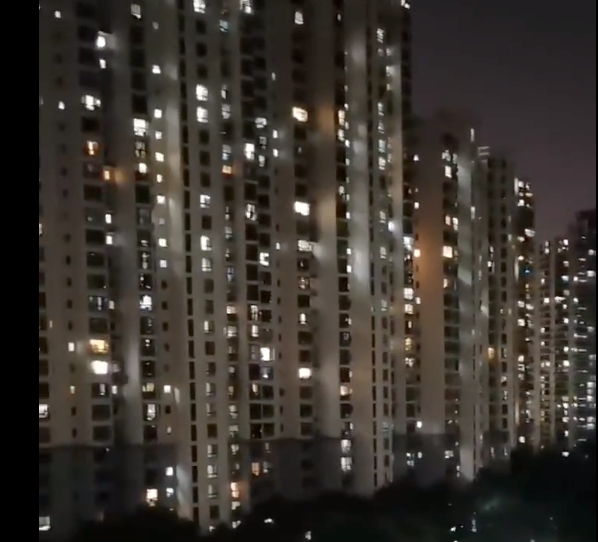 The eerie sounds you hear walking under the concrete prisons that accommodate the people of Shanghai is a sound of despair, a loss of hope reminiscent of what one imagines blood-curdling screams of the damned to sound like at the gates of hell. This is China in the year 2022, where human beings are locked up in their millions and not allowed to venture out even for food.

What the?? This video taken yesterday in Shanghai, China, by the father of a close friend of mine. She verified its authenticity: People screaming out of their windows after a week of total lockdown, no leaving your apartment for any reason. pic.twitter.com/iHGOO8D8Cz

Imagine being stuck in one of these pokey apartments on the thirtieth floor, you cannot get food, deliveries are cancelled, you are down to your last morsel and no one answers the phones anymore. If you step outside of your tiny apartment, you are immediately accosted by thugs wearing hazmat suits and thrown back into your barricaded home to face slow starvation. The brutal communist regime treats human beings like cattle, in fact worse than cattle.

Into this wild Abyss
The womb of Nature, and perhaps her grave
Of neither sea, nor shore, nor air, nor fire,
But all these in their pregnant causes mixed
Confusedly, and which thus must ever fight,
Unless the Almighty Maker them ordain
His dark materials to create more worlds,
Into this wild Abyss the wary Fiend
Stood on the brink of Hell and looked a while,
Pondering his voyage; for no narrow frith
He had to cross.

The despair amongst the people of Shanghai is at such a level that many are simply choosing to jump from their apartments. The dull excruciating thuds can be heard all around emanating from the soulless concrete monstrosities built alongside each other. The screams of despair do not stop, they continue day and night, ignored, of course, by the robotic party officials who are too overwhelmed to even register what is going on.

This is the Malthusian nightmare all too evident in Shanghai today. Overpopulation only brings forth misery, suffering and despair. China is a prime example of the dangers of overpopulation, and one can only hope for a merciful reduction in their numbers. China not only pollutes its own country, but the entire earth.

In this time of insanity and global chaos, we can only watch from afar as those poor souls scream from their apartments, forgotten remnants of a Chinese state run exercise in brutality.