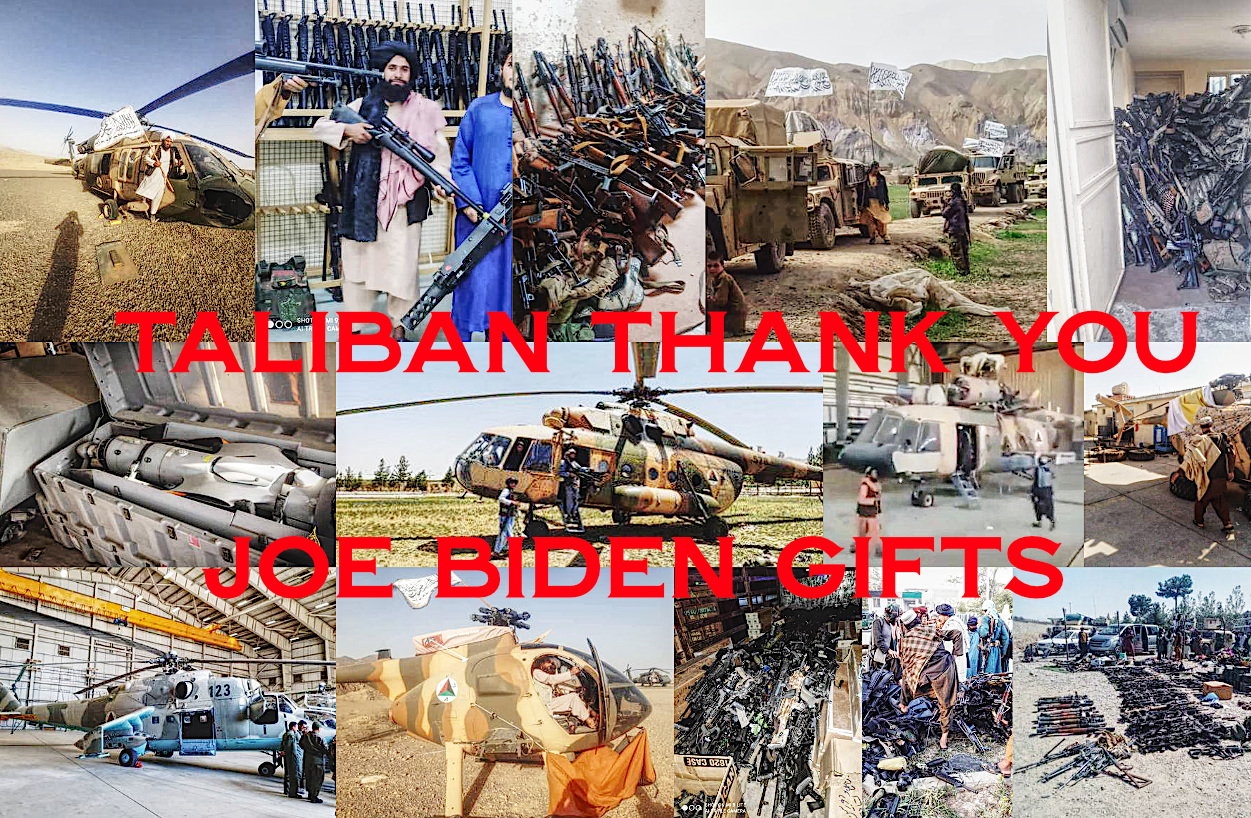 It’s like Christmas, New Year, and all birthdays rolled into one for the new Taliban 2.0, simply because of the wonderful gifts given to them by Joe Biden, on a golden platter, without a single bullet being fired.

Of course, the new Taliban are talking all liberal, they’re so happy right now with the billions of dollars of gifts, they’re simply Jihaded out!

Women and girls rights? Sure, on the surface it will look like some concessions from the old days, but under the surface, much will be the same. Sharia law is Sharia law after all.

When it will get dark, the old ways will resume in silence, the knock on doors for those who conspired against them, the young women told to follow their new master at gun point, and of course the vast swathes of poppy fields now all under Taliban control ready to be harvested, processed and shipped over to the West. With a restricted Western press allowed in the country, nothing will be reported.

The Presidential Palace, including its gymnasium, in #Kabul has new tenants. #Afghanistanpic.twitter.com/vl50ojoRQD

The Taliban now have state-of-the-art gyms to get fit in, they even have fucking dodgems to clown around in and even an air force gifted to them by Joe Biden, worth billions of dollars. The new breed of Taliban now have access to American military gear like night vision goggles, M4 machine guns, kevlar body protection all with close air support from Blackhawk helicopters.

UPDATE : Funny thing is, in a fit of Sharia conscience the same Taliban crew filmed enjoying dodgems in the fair ground, torched the motherfucking place down, a few days later.

The Bokhdi Amusement Park was set on fire by Taliban insurgents in Begha, Sheberghan. The reason is that the statues/idols standing there are in Public access Idols are illegal in Islam, This is the logic of the Taliban’s brutal emirate. The homeland is occupied.#Afghanistan pic.twitter.com/MBuYsQQbxk

It’s all smiles, folks, thanks to the surrender of the weak and lazy Biden administration, who just could not be bothered with it all anymore. The reason for the apathy, and laziness is probably that there were no visible transexuals in Afghanistan, so the Biden admin just got bored. Without gays and transexuals to virtue signal over, what was the point of being there for the socialist Biden admin? It seems they do not give a fig about the fate of women and girls in the country, so they abandoned everyone to a fate of silent death to the now emboldened and extremely rich Taliban.

As for the Taliban, they simply played the long game and won. The Taliban always knew the Westerners did not have a heart in what they were doing in Afghanistan, and they punished them with not only many humiliating deaths, but got them to spend trillions of dollars for nothing.

“We helped bankrupt them over twenty years and tired them out, killing many of their soldiers. The icing on the cake, thank you to Joe Biden, you left us billions worth of military hardware, and helicopters, Humvees and drones,” one Taliban member quipped whilst reclining in the former Afghan president’s palace.