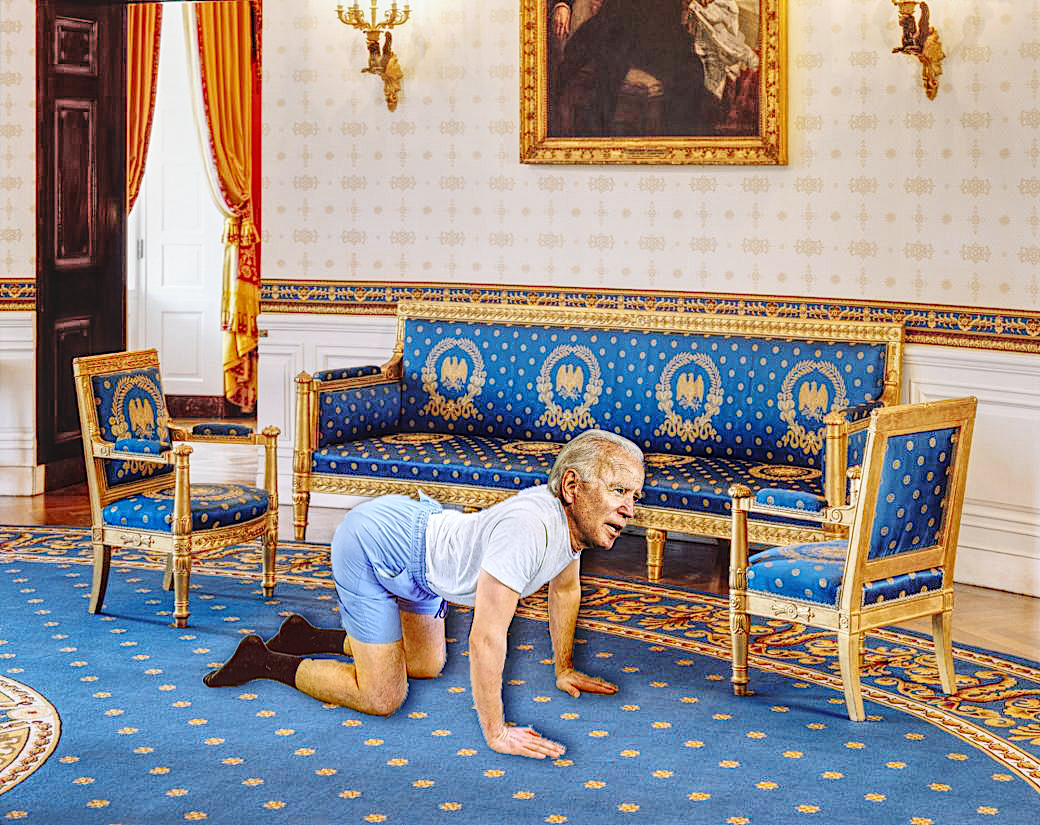 Joe Biden on all fours was spotted by numerous White House aides scooting around the Blue Room floor and having an in-depth conversation with a set of chairs from Paris made by Pierre-Antoine Bellangé in 1817.

“C’mon man gimme a break! So your j-j-job is to sit there in the corner and not do anything all day? I wanna that job! Co co shibuz namamamama trailblazers sasquatch. Okay, you stay there, lemme scoot over and I’m going to raise my leg and pee on the curtain! Woof, woof, woof! Hummada hummada hummada boizee boizee boizup!”

After talking to the set of chairs for three hours, Biden then sat on his butt on the floor and started pulling himself across the floor dragging himself towards the famous Resolute Desk, a gift from Queen Victoria in 1880. Under Biden’s patronage, it has been relegated to a small cupboard room. The large oak desk crafted from the timbers of the HMS Resolute was presented to President Rutherford B. Hayes. Timbers taken from the abandoned ship during an arctic expedition were used to make the desk, and sent to the White House as a gesture from Queen Victoria after Congress provided funds to repair the ship and return it back to England. Many presidents since John F. Kennedy began the tradition of using the Resolute desk in the Oval Office, but not Biden because he knows full well he is not President of the United States. It is no secret that Biden also despises the British with a vengeance and this is why he hates this particular desk so much.

“I hate you! Get outta my sight man! Putin invaded Ireland, we gotta free Ireland from the Brits, goddamn hackers they hacked Ireland! It’s all the Limeys fault! Going back to New Orleans, here come the Neville brothers, be there for the Mardi Gras, is that a jumbo jet?”

After a furious tirade where Biden’s face goes all red with rage he rolls around on the floor crying for the “Emerald Isle” then unzips, cocks his leg, and pees on one of the legs of the Resolute desk.

It’s just another day in the Biden White House, nothing to see here, folks!