One minute she was a staunch ISIS bride part of the short-lived Islamic State and the next, Shamima Begum is now a pole dancing stripper trying to imitate what she sees as Western ways in order to be given entry to the UK.

From Burqa to Pole

“I will show you my twerk moves on the pole in my tent. The vermin parasitical lawyers who are profiting off this attempt to re-enter the UK have told me I have to look and act more Western,” Shamima revealed whilst sticking her butt in the air and wiggling it provocatively.

Caught between a rock and a hard place

Apart from having a skewed unrealistic view on how most Western women act, Shamima Begum is not only a sham but her daily begging to come back to the UK looks pathetic and fake. It is not known what her ISIS friends think about Begum’s new look, especially, as it borders on haram and is most certainly punishable by beheading according to ISIS rules.

The only place in the UK that Begum needs to go to is Wormwood Scrubs for the next 35 fucking years, not only to keep the British public safe from her, but her safe from a fatwa. 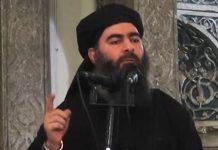