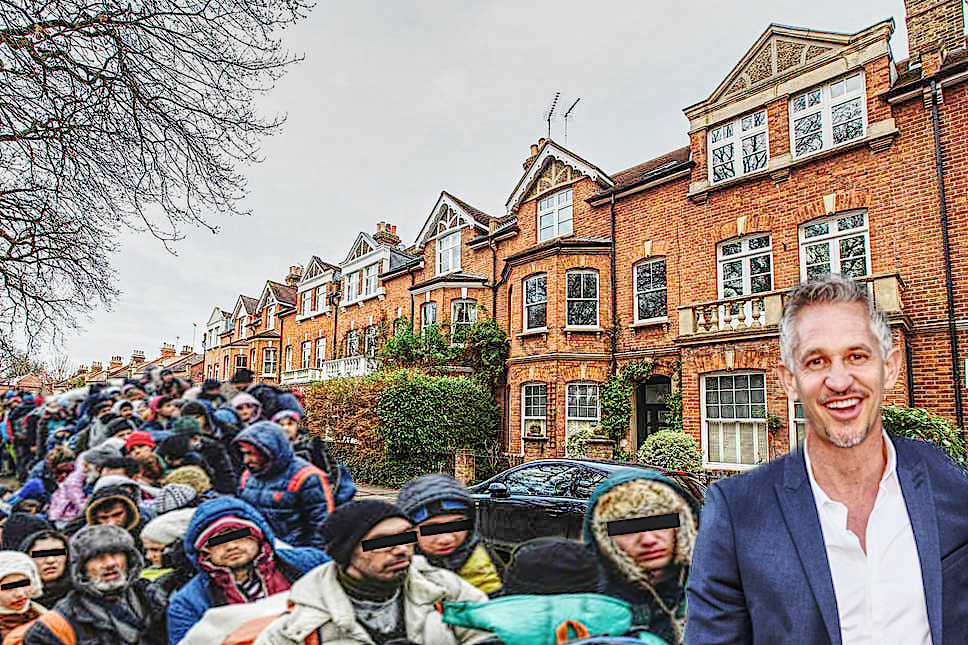 When it comes to virtue signalling champagne socialist celebrities, some would mention the name of BBC darling, Gary Lineker, who seems to be so far left with his politics that he might as well be preaching from a Siberian Gulag.

Much like other socialist luvvies, Lineker wants to stand up and be counted, and where Lily Allen failed, he is announcing to all the newspapers that he wants to take in an economic migrant into his massive £4 million mansion in leafy posh, Barnes, London.

“You can’t buy a shed here for less than a million, but with my exorbitant BBC salary for working four times a month, I can afford a grand mansion worth quite a lot of money. Thank you, BBC licence taxpayers, if it were not for your stupidity in paying my bills I would not be living in the seat of luxury,” Lineker said from his couch giggling like a deranged hyena.

It’s all good though, with the thousands of economic migrants crossing the Channel this summer in rubber dinghies, Gary Lineker has kindly offered a lucky migrant a place in his home, after being called out on his Twitter account.

“I like the Willy Wonka feeling I get when I announce that there will be one lucky migrant living it up with me in my £4 million mansion. This empowers me, I feel important, I get publicity, and of course I get to keep a token of misery to show off to my media friends at dinner parties. Bring out the Syrian migrant I will announce, and the servants will lead out the migrant to bow to the guests, maybe one of the guests will blow some cigar smoke in their face, or flick some trifle at their noggin. I will be the talk of the town. You just can’t buy PR like that from any agency,” Lineker quipped whilst cheekily putting one of his bogies under his sofa.

Gary Lineker’s neighbours are not so enamoured by this overt champagne socialist celebrity show though, especially as the area has now been inundated with makeshift tents, migrants cooking whole chickens in the streets, and the Canada geese from the pond in the Green going missing.

“It’s not just migrants looking to live in Gary’s £4 million mansion, we’ve now also got thousands of over-75s who can’t afford a TV licence turning up. One chap from Liverpool, has daubed his face in brown paint and is pretending to speak Arabic,” a concerned neighbour revealed.

It’s going to take days or months for the right migrant to be chosen to live with Gary, and as the long queue snakes its way around a few blocks of houses, reality is dawning on the do-gooder celebrity.

Why just one migrant? So many need help. The fact is, most of Africa and Asia needs help, thus giving assistance to one or two is not enough, there are literally billions of humans on this earth who need help. Give help to a few, then the rest will think it is okay to come, and so on and on. Soon, there will be no room left for anyone, let alone that single migrant, or even you in your own home. Where does it end? Does it end with a token refugee, so you can say you’ve done your bit, whilst the problem still lies for billions of refugees still out there?

Well, forget all about semantics, it’s all now down to some overpaid smarmy gurning celebrity cunt to deal with the vagaries of the migrant crisis — cue, Gary Lineker. The man who will solve everything in one fell swoop.