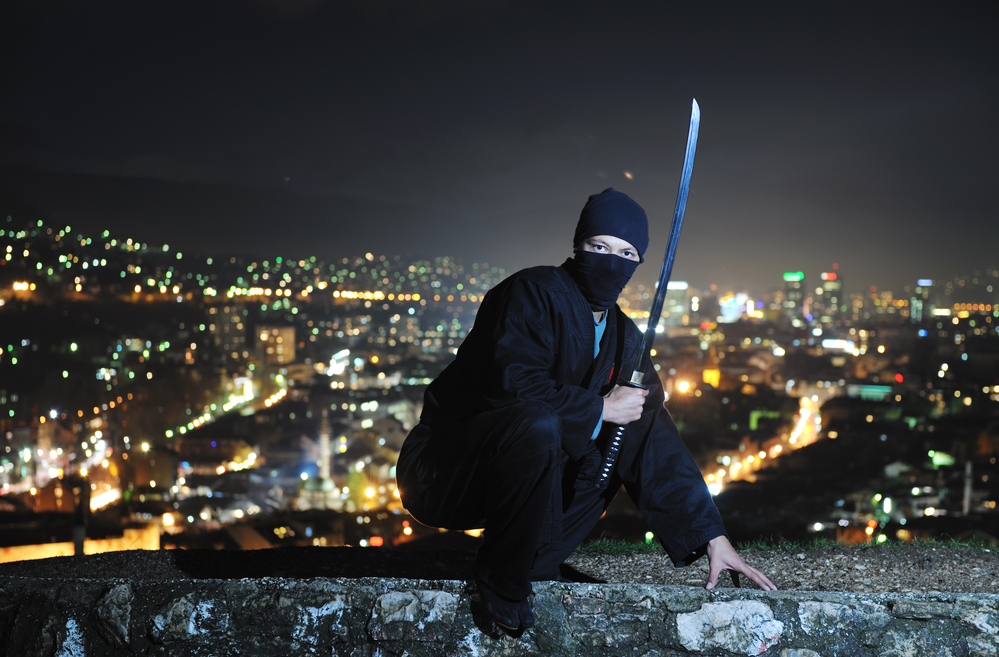 Clambering over a roof in the deep of the night, this ninja is on a mission, and dressed in full Ninjutsu attire including a mask, he is also somewhat protected from contracting the airborne virus, Covid-19, that seems to be bothering everyone of late. Ninjas have been wearing masks for centuries.

“I have no problems with wearing a mask, it’s part of my job as a hired ninja assassin. I just completed my most recent mission of dispatching a businessman on the hit list. I snuck into his office whilst he was surrounded by eight bodyguards, and a retinue of security men. The place was full of cameras yet there was no trace of my presence. The job was easy, I just used a blow gun with a miniscule dart that infused a poison into the target. He flopped down on his desk face first, and by the time the hired thugs were looking for me, I was well gone, over the rooftops.”

Ninjutsu, or Bujinkan is not a martial art but a way of life for many, and the deadly techniques of ninjutsu are usually taught in secrecy by clans that mask their identity.

“We don’t officially exist, and we operate in absolute secrecy. We actually think it’s great that everyone has to wear a mask these days because it makes our lives easier. We can operate in plain sight without any suspicion, and the many cameras around are not effective any more,” the ninja revealed.

Ninjutsu was developed as a collection of fundamental survivalist techniques in the warring state of feudal Japan mainly during the Genpei war and the Kenmu Restoration from 1180 – 1336. The sect that developed from the samurai has been operating ever since in utmost secrecy.

Ninjas use their art to ensure their survival in times of violent political turmoil and sometimes as hired assassins for clandestine agencies working way below the radar.

Ninjutsu includes methods of gathering information and techniques of non-detection, avoidance, and misdirection.

The highly developed skill of espionage has become known collectively as ninjutsu, and the people who specialise in these tasks are called shinobi no mono.