The supreme soviet comrade was seen yesterday on a stage with many soviet children as he urged the soviet American nation’s gun owners to relinquish their weapons so that they can be disarmed and pliant to the 5-year soviet plan of complete collectivist sovietization.

“Comrades, just like other previous comrades and tyrants, I too am using children as a cynical front for my disarmament activities on the U.S. public.

“Unfortunately for me I cannot continue the complete sovietization of America until you are all completely disarmed. We will drip feed this protocol by first banning certain ammunition magazines and certain other dangerous arms. Once this is done, you, the public will not have the same military grade ammunition or weapons as the soviet forces who are readying themselves right now.

“We will then move in for the final ban, which will be a complete outlawing of all arms from the public. As a weakened civilian force due to armament bans, we will thus be able to disarm you quickly and efficiently. There may be a few pockets of resistance but you will not survive the soviet might of the DHS, ATF and other agencies.

“I, as your supreme commander therefore command you henceforth to relinquish your weapons in a peaceful manner or you and your family will eventually be liquidated. We can do this the peaceful way or the not so peaceful way,” comrade Obama said to the sound of cheering soviet children. 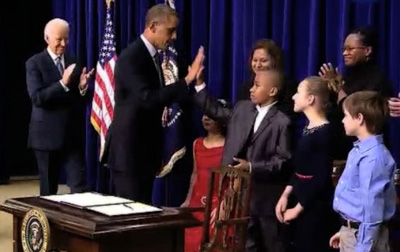