The last lost decade will thankfully be over soon, and will be remembered as an era when the American socialist party — the Democrats, and the British socialist party — Labour, tried with all their might to destroy democracy in the West.

We should never forget this turgid skirting of an Orwellian dystopian totalitarian era, as in the end, the voters, the people, and democracy eventually prevailed over the socialist authoritarian threat to Western ideals.

The nightmare of Obama and Hillary is over, as is the nightmare of Corbyn, their evil plans squashed in the maelstrom of time, displaced and forever enshrined in ultimate socialist failure.

If the socialists had won, we would all be aligned with Chinese communism within a few more years. What the socialists brought to the table was extreme forms of political correctness, cancel culture, permanent victim culture, extreme censorship, and a form of totalitarian authoritarianism to everyday life that made everything under their debased political ideology unbearable to live under.

The radical feminist #metoo system introduced a socialist victim culture, where every one was a victim, where suspects were tried and punished without due process by social media mobs, all within minutes. Many innocent peoples’ lives and livelihoods were ruined simply by the click of a keyboard.

At every turn, the socialists, rejected democracy, they rejected the election of a new US president, duly elected by the people, and they rejected the EU Referendum result, denying the vote of 17.4 million people in the UK. They tried with all their might, dirty tricks, lawsuits, and media censorship, as well as media lies to ruin democracy, but failed in the end.

To align with China is the ultimate goal of the socialist globalists in the West, and to do this they are prepared to dump democracy and much of our freedoms. Because they are already in places of power in the West, they know they will be assured safe roles in the Chinese Communist party. The goal of Soros and other Marxist organisations in the West, along with the major tech monopolies, is not only to increase economic ties with China, but a political alignment with the brutal communist regime.

Obama idolised the communist Chinese bowing so low when he met their leaders that he practically touched his nose to the floor, and as Google rejected jobs from the Pentagon, instead opting to work for China, there was further proof where its true allegiance lay. Facebook’s CEO, Zuckerberg impressed his Chinese communist masters with his mastery of the Mandarin language, as he adopted many of the communist surveillance tactics utilised by the Chinese politburo on his own social network users.

The Orwellian tech companies are now intent on installing smart listening devices in every home, which listens to every conversation families have. 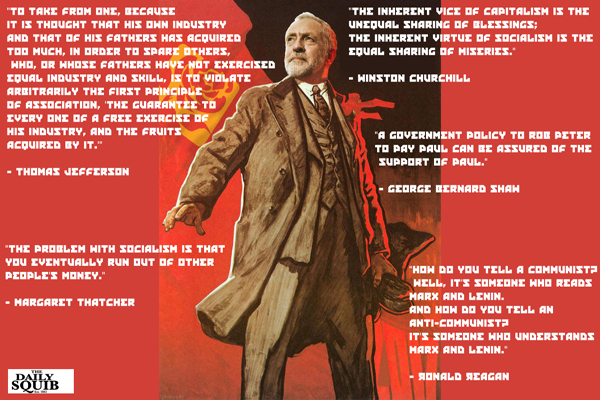 Marxism is borne from the roots of socialism, and the major leftist parties in the West have gone so far left, they are almost indistinguishable from the forms of communism around during the Cold War.

It is not over yet though, just because there are conservative democratic forces in power today in America and the UK, there are still socialist and communist threats that prevail.

We have the EU Soviet bloc, led by unelected totalitarian bureaucrats in the EU Commission. We have the assortment of Marxist financiers and billionaires working day and night to destabilise the West through forced mass immigration, and we have the constant threat of tech monopoly companies who are now so powerful they are above government control, and due to their off shore assets and ability to skirt paying tax, can do anything they want. The underlying infrastructure of many Western governments are also still under the orders of socialist parties, which will take many decades to fix.

We once wrote an article about how socialists are an even bigger threat when not in power, and in the last decade we witnessed their threats first hand.