Around Britain, the nation is preparing to party like it’s 1952 all over again, only this time with better food and miles of Chinese made plastic bunting (1,500 miles of it, according to the latest estimates from Oxford mathematics professors).

Tesco is expecting to sell 200,000 bottles of cheap champagne from Romania, 2.8 million Victoria sponges baked in India and two million punnets of strawberries grown in Spain this weekend.

“This is going to be amazing we are so excited to celebrate her majesty’s incredible rule. Allahu Akbar,” Mohammed Al Makruni, a resident of Chigwell, Essex, told the BBC. 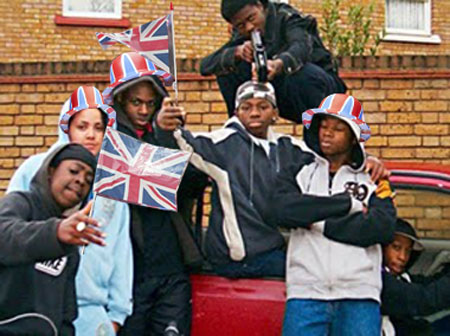 The Thames river procession, organised at a cost of £100.5 million to honour 60 years of Queen Elizabeth’s reign as monarch, will be the main event, celebrating the cultural richness of Britain in 2012.

“What better way to show the cultural diversity of Britain with a German Queen and a flotilla of refugee boats, some from the Sudan, some from Somalia, Tunisia, Morocco, Albania and Greece,” royal correspondent for the BBC, Jim Sacker, reported.

The flotilla of over 2,000 refugee boats will come up the Thames from Grays, Essex, then make its way up the river to Chelsea bridge where the refugees and illegal immigrants – who will have sailed on their last leg of the journey from France – will jump on shore and start the asylum process immediately.