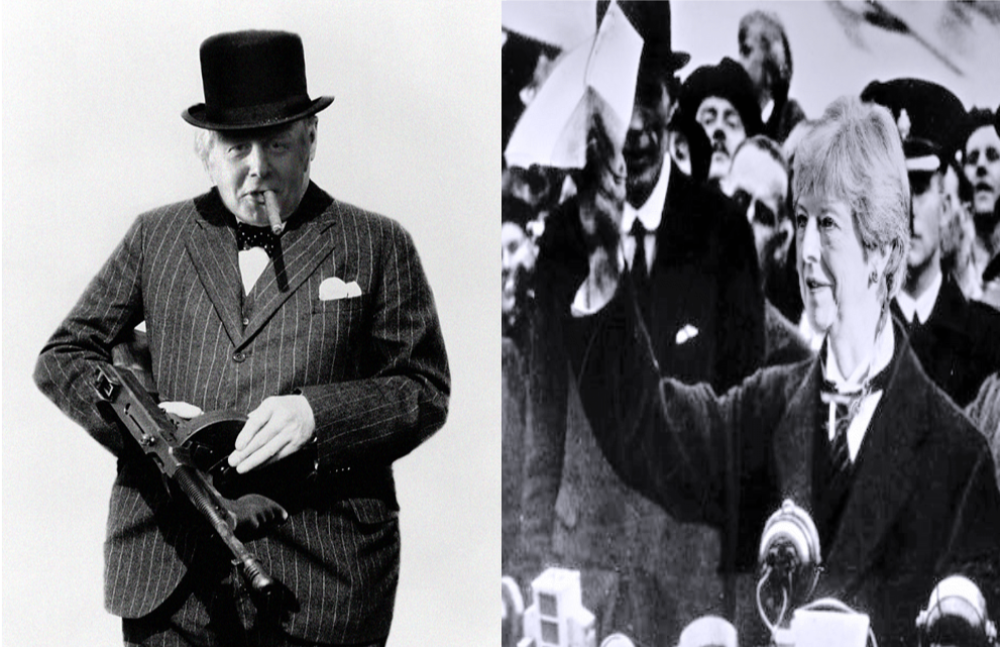 The time of the appeasers has gone, whisked away in the wind of treachery, surrender and half-hearted farts paid for by unelected Brussels technocrats and their cosy brown envelopes brimming with unmarked euros delivered in dark alleyways.

Of course, we still have the hardcore Grieves, merchants of misery whose sole duty is to appease the enemies of Britain, and the Haw Haw Hammonds, the foul blubbing Clarke, and snivelling Letwins, all strange monstrosities who beg for eternal slavery, loss of sovereignty, and who feel the utmost disgust that there is such a thing as democracy in Britain today.

In 1938, as Germany began controlling its neighbours, Churchill had become a staunch critic of Prime Minister Neville Chamberlain’s policy of appeasement toward the Nazis.

Theresa May’s role in all of this is one of Neville Chamberlain, and as he appeased Hitler in the latter part of the 1930s, she did the same with the EU. Her constant lies about honouring the will of the people were an ongoing joke, especially when she was presenting a document written by Brussels which would have imprisoned Britain in the EU indefinitely without a get out clause.

It will take much effort, toil and sweat to rid Britain of the horrible defeatist stench of the Theresa May posse of remainers. These people have committed untold sins against this country, and if we were in a time of war, they would surely have been arrested for their role against Britain. This disgraceful coterie of miscreants and cowards, are tactile traitors who generate constant negative nonsense about Brexit, as well as stoking the fires of Project Fear in their pathetic bid to revoke Article 50.

In May 1940, debate in Parliament on the Norwegian crisis led to a vote of no confidence toward Prime Minister Chamberlain. On May 10, 1940, King George VI appointed Churchill as Prime Minister and Minister of Defence.

In May 2019, debate in Parliament on the Brexit crisis and Theresa May’s inept leadership led to her naming a date for her resignation. On May 24, 2019, Theresa May announced her resignation and the commencement of a Conservative party leadership contest. The frontrunner of this competition was immediately apparent with a massive following — Boris Johnson.

The parallels between 1939 and 2019 are indeed unnerving. In both instances, we see the aspirational growth of a Germanic empire or Reich. The 2019 version is not based on military conquest, yet, but economic and political forces led by Germany through its proxy, Brussels. The European Union now wants closer integration, it wants its own EU Army, and it wants to increase its dictatorial totalitarian rule further around the globe. The Reich of Hitler, was created first militarily and then the economic part of its rule over nations came afterwards. The EU however conquered nations through economical means, and is only now increasing their EU Army size. War will come later for the European Union as it will need to expand East to survive. No empire can survive without constant expansion.

Remainers always tout Sir Winston Churchill as being one of the founders of the European Union, but they have not done their research. Churchill fundamentally envisaged a post-war Europe led by Britain and France. Instead, Germany and its defeated slave France are in charge of the EU. Not only that, Britain throughout its 40 years in the EU has been ostracized and maltreated by the EU, all the while using Britain as a piggy bank or cash cow.

Now is the time to fight back, and Boris Johnson must go through with the implementation of Brexit. If he does not, the entire Conservative party will be in serious danger of destroying itself. The back-up plan, if Boris fails also lies with Farage’s Brexit Party. In ideal circumstances, these two political entities could pull off Brexit by working as a team. We shall see.