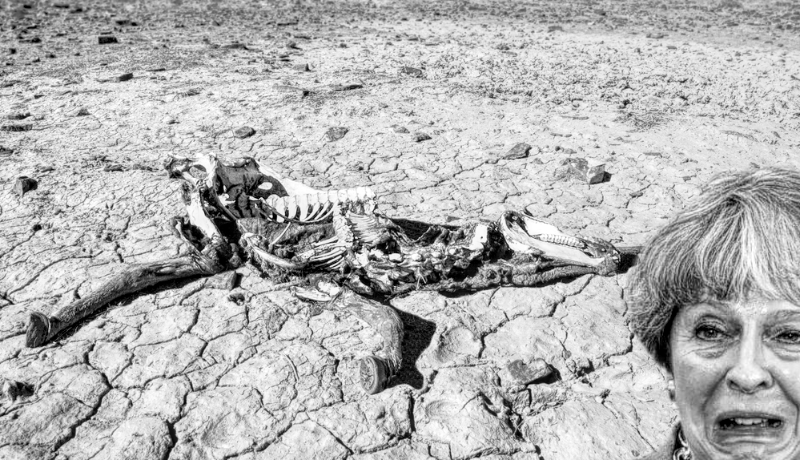 Not even fit for the glue factory, Theresa May is now attempting to sell her awful deal for the fourth time, but this time has cast aside all aspersions of it being a Brexit because she wants Britain to stay in the Customs Union permanently, thus making the whole sham an even worse bodge up than her other pathetic BRINOs.

How long can this madness go on? What does it take for this godawful wretch of a woman with no dignity left in her awful looted lying soul to get the bloody message that no one wants anything to do with her deal, or with her anymore.

Cue the highly embarrassing tawdry parade of Tory EU MEPs holding a press conference with no audience in the room apart from one press photographer who captured the miserable looks on those sacrificial lambs before they are sent out to slaughter.

The definition of insanity is doing the same thing over and over again and expecting a different result, and Theresa May is frankly not just insane, but it seems very stupid and naive as well. Yet, not one Tory has stood up to her, or ousted her from turning the Conservative party into a laughing stock. Of course they have their reasons, Corbyn, a name that comes to mind, and the fear that a real Brexiteer could take the reins.

As for pushing this rehashed monstrosity through parliament, good luck with that. Which self respecting Tory would vote for it, especially when May went behind the Conservative party’s back to court the anti-semitic Labour party?

For their failure in ousting May earlier, the Tory party deserves everything it gets from now on, and that’s a good kicking in the nether regions, followed by another mass exodus of voters and MPs.