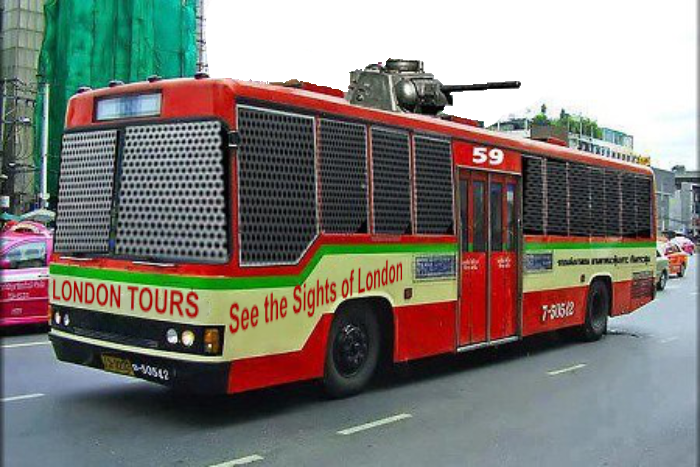 The heavily armoured new London Tour buses come equipped with some serious firepower and armour to counteract any contact with the numerous gangs running around freely in the capital.

With 50 inches of plate steel armour and reinforced tires, the newly introduced tour buses will thus ensure complete safety for tourists who wish to see the sights of London.

On the roof of the bus is a 50 caliber turret gun controlled by the gunner seated inside. The turret gun can spit out 45,000 rounds per minute, with a range of 3km.

“Because of the window protection, tourists will not be able to directly look out of the windows but each bus is furnished with a 4k TV screen so the tourists can view London in complete safety as the cameras record the journey. We also have onboard, a team of ex-SAS men on standby fully geared up with the best weapons, just in case, in the unlikely event that any criminals or gang members try to storm the bus,” Roger Ellman, the tour bus company’s spokesman revealed to the Evening Standard.

All tourists taking the London tour will be given training in using firearms, as well as be dressed in bullet proof vests and helmets.

“To counteract the mass stabbings, terrorist drive-thrus, mass shootings, mass muggings and burglaries, as well as my wonderful skills as mayor of London, I now announce the introduction of the new tour buses on our safe streets. It is perfectly safe to go on London’s streets,” the Mayor said just before four masked men appeared from a dark alley, mugged and beat him to a pulp.