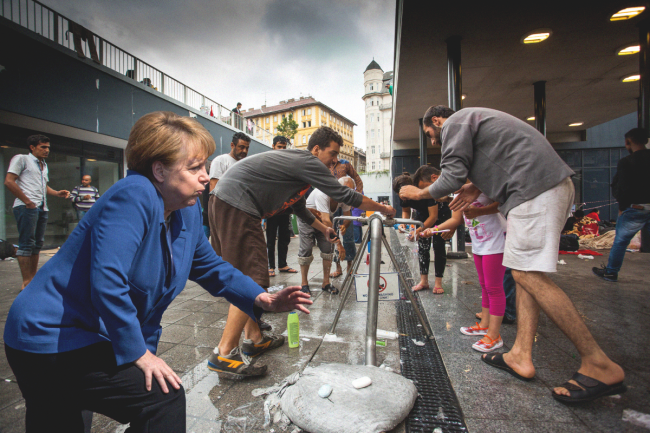 On her latest trip to Strasbourg for an EU meeting on mass unfettered migration into the Schengen zone, Chancellor Angela Merkel was caught up in a rather embarrassing situation.

“The Chancellor was dropped off and was making her way to her train platform when she was greeted by a number of migrant men washing their feet and other body parts from a tap on the main concourse,” Merkel’s attache, Hans Gruper, told Bild.

The Chancellor was immediately embarrassed by the situation and tried to sneak past the collection of men washing.

At one point, a man pulled down his trousers and proceeded to wash his anus with nothing more than his hand and cold water.

One onlooker found the event quite amusing.

“I saw Merkel holding her breath as she attempted to sneak past the group, but the sight of the man’s anus being washed in front of everyone was too much, even for the Chancellor. Of course, it is not the fault of the migrants, this is how they live in their culture and are not phased by such actions, but in Germany it is not normal or civil behaviour.”

Chancellor Merkel did eventually catch her train to France, albeit with a little trauma on the way.

Since the massive influx, in Europe it is quite common to see such displays in public places.