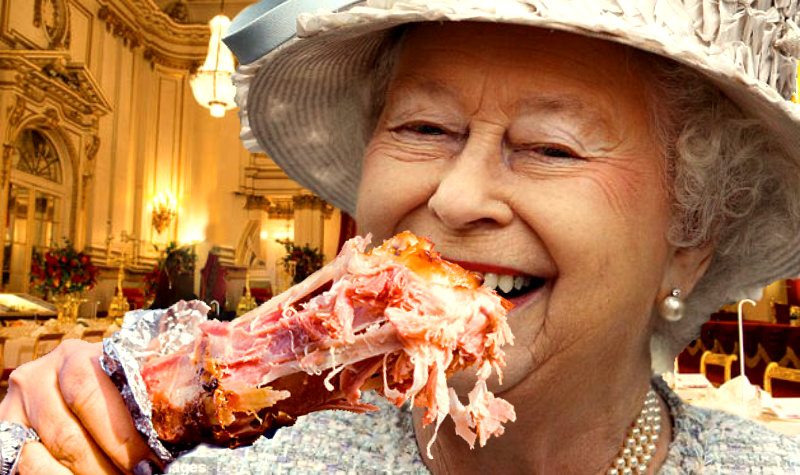 Meghan Markle, the latest addition to the Windsor roster, is thinking of introducing some culinary delights from America to the usually bland royal menu.

Usually the Windsors sup on boring old fodder. The Queen for example will break out the gin and Dubonnet before chowing down on grilled Dover sole with some sauteed veg on the side, you know maybe some spinach or a courgette. Certainly nothing starchy.

Prince Charles, a boiled egg aficionado has them served by a team of twenty servants who wait for approval of each egg presented to the prince. If an egg is slightly too runny or too hard, it fails the test and is discarded.

The Duke of Edinburgh is rather partial to barbecues therefore he will fit in with American cuisine very well.

Speaking exclusively to Marie Claire magazine, Meghan Markle revealed her intricate plan on introducing the royals to her roots.

“My momma told me she always say ‘eat up yo collard greens’ and one day you grow up to be a beautiful princess. Sho nuff, imma qualified to be a bonafide ass princess of royalty and live in a real goddamn palace wit’ servants and shiet!

“First off, Imma stand up during lunch and axe da folk ‘Who’s up for some chitlins I be prepared sum earlier?’ and I knows when they smell those chitlins they be salivating at the mouth fo sho!

“Once they see the food we done prepare, hmm, hmm, just like momma cook, they will know what real eats is fo sho, honey! We got deep fry ham hock, black eye beans, pork brains and eggs, cornbread, rice covered in gravy with neck bones, all served up in one tasty bowl mixed in wit’ a stick.”

Certainly, the Windsors are up for anything, and the introduction of African American soul food into the diet may be just the ticket for an altogether livelier atmosphere in the royal palaces and court.