Home World French Waiter Fired For Being Too French 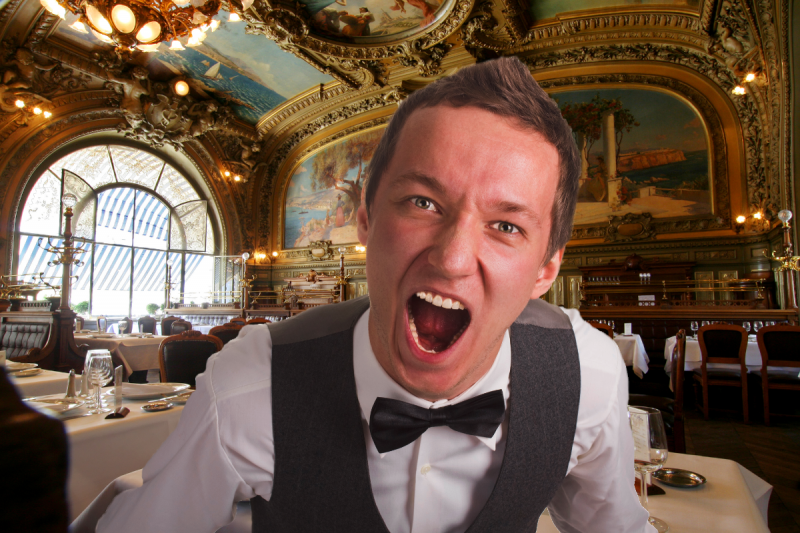 Sometimes satire melts into real life news, and these days this phenomenon is all too common, especially when it comes to the French sensibility.

Here we have a news story of a Canadian restaurant firing a perfectly good French waiter simply because he was way too French for their liking.

He owes his sacking to his “direct, honest and professional personality,” which he acquired while training in France’s hospitality industry.

North Americans and Canadians (even French Canadians) simply do not understand what French manners are like.

In Paris, if a waiter spits in your soup just as he is to serve it to you, that is considered a considerable compliment. He will do this while eyeing up your girlfriend or wife, and giving her his phone number. In France, not an eyelid is batted by the locals to such behaviour.

For Parisian waiters, to be rude, offhand, aggressive and downright arrogant is just a way of life, it is a form of expressionistic painting, the joie de vivre without life’s enjoyment but sheer purpose in serving the customer their overpriced haute cuisine slop.

“For tourists, we put on a show for them. Especially the Japanese ones who have this idealistic view of France, you know cobbled streets, a beret carrying a baguette under the arm. We insult these cochons then charge them through the roof, and they love it, when they leave traumatised for life,” a particularly arrogant Parisian waiter recently revealed.