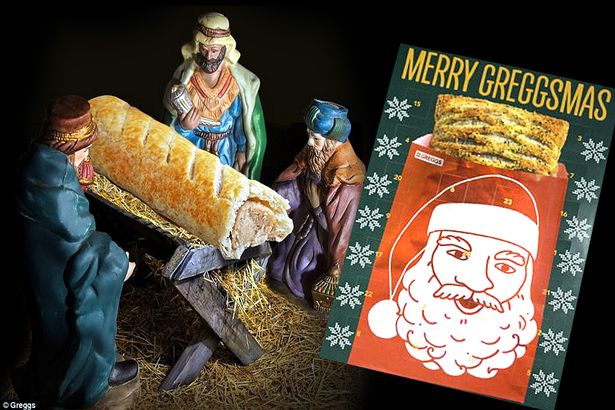 Many formerly mild mannered Christians have taken to Britain’s High Streets in utter outrage that Greggs bakery supplanted a picture of Jesus in the Manger, for that of a sausage roll.

Reverend Miles Kettering, 62, was caught in the village of Bell End, Worcestershire, by MI5 operatives this morning in a dawn raid with two Kalashnikov machine guns and an assortment of home made bombs. It is believed he was getting ready to assault the local Greggs Bakery in the village.

Mavis Butterworth, 87, a regular church-goer at Bell End church, was shocked by the whole affair: “Reverend Kettering was to his flock a mild mannered good Christian who was very kind to us all. This is why it is such a shock. I fear, however, that the Greggs sausage roll pushed him over the edge.”

Meanwhile in Scratchy Bottom, Dorset, it is believed some choir boys from the local church had been brainwashed into wearing suicide vests and told by the congregation to target Greggs bakeries within a twenty mile radius.

“They were told that if they avenged the depiction of Jesus as a sausage roll they would all go to heaven and receive 72 piping hot sausage rolls for eternity,” Janice Frampton, 75, told the local newspaper.

Across Britain, many formerly mild-mannered Christians seem to have been triggered to act, as this sausage roll Greggs fiasco has spread across the media.

To counteract the possible attacks, Greggs has 24 hour armed guards standing outside each bakery, with concrete bollards and perimeter fences safeguarding the bakeries.