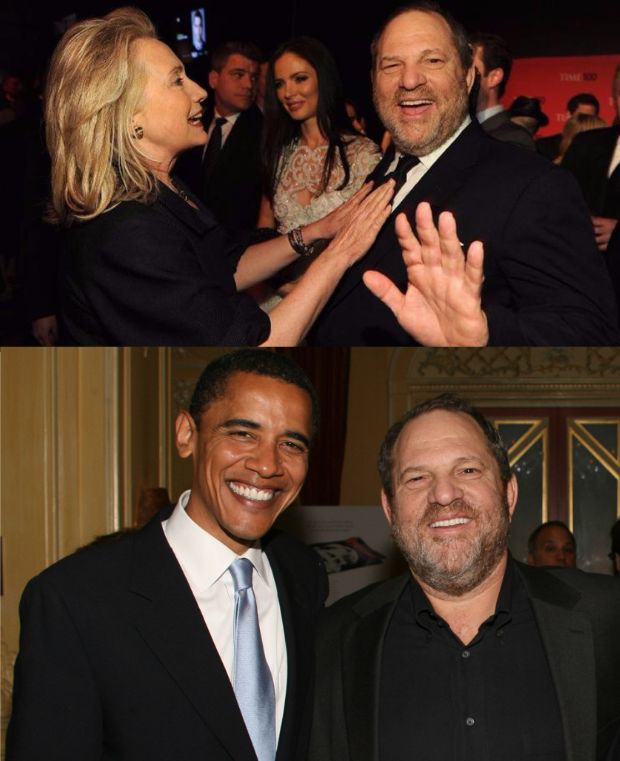 These are confusing times for American socialists, especially when a key fundraiser for Obama and Hillary Clinton is revealed to be a lecherous abuser of young women and not the fawning male feminist supporter of women’s rights he made out himself to be.

The reason scumbags like Weinstein can get away with what they do for years is because they pretend to be liberal nice-folk, as well as wielding massive amounts of power in the film industry. Sure, Harvey Weinstein looks like a fat sweating maggot, but he can have any fawning starlet in the room if he wishes because he can get these starlets a place in the lights, you know the spotlights and red carpets. Blow this fat sweating malevolent movie mogul, and they get their careers a major boost, but they gotta swallow and do it right, no cum dodging.

Here was a guy who attended Planned Parenthood galas. He co-hosted lavish fundraisers for Barack Obama and Hillary Clinton. Weinstein helped fund the Gloria Steinem Endowed Chair in Media, Culture and Feminist Studies at Rutgers. All the while, he was getting young ladies who wanted to be top actresses to go down on him, promising them the world whilst on the other hand paying off other women who wanted to sue him for sexual abuse.

Weinstein should have just been honest with his intentions, I mean who doesn’t want to fuck young beautiful women? If he was honest about it instead of painting himself as some male-feminist champion of women’s socialist rights, he would not be in the trouble he is today.

It is quite hilarious and funny to see these pompous social justice warrior snowflake ‘progressive’ chipmunks now eating their words, as lie after lie is exposed, and abuse after abuse is catalogued for the daily papers.

The American socialist liberals are hypocrites, and have abused their power for far too long, hopefully they take some time to realise what they have turned into, and reflect on their descent into lies.