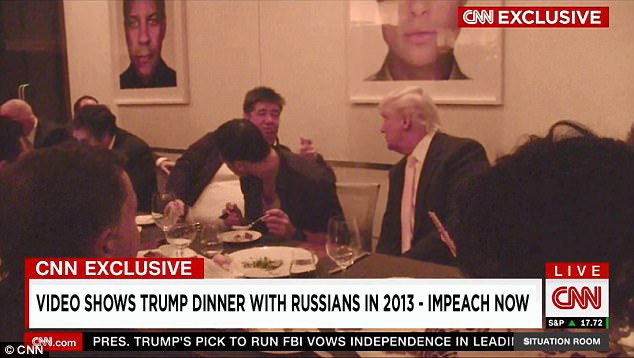 Also, Trump’s son met with some Russians for a twenty minute meeting and talked about nothing much in particular.

With calls to impeach president Trump just because he met with some Russian business people over dinner in 2013, there is definitely a feeling of triumphalism amongst the left-wing American press, and democrat party.

“He had dinner with the Russkies in 2013. What more proof do you want that Donald Trump is working for the Russians and is a spy who flipped the elections,” one CNN reporter quipped during a newscast.

The U.S. media has been buzzing with the news for the last 48 hours with constant repetitive headlines about the Trump dinner.

“Yeah, it was in 2013. This proves that Trump and his sons are spying for Russia and rigged the election against Hillary Cliton,” another CNN reporter squawked.

One CNN reporter even went as far as to suggest that Trump had committed ‘treason’ for enjoying dinner with the Russians back in 2013.

“If he enjoyed eating the sushi whilst politely talking to the businessmen on an ongoing deal, that means it is treason and Trump should be impeached, arrested and put in the stockades.”