Whilst the country’s economy is in turmoil and the jobless can be heard wailing in the streets of America, Barack Obama and his family are enjoying a string of indulgent holidays as their Washington home is being redecorated.

“Mr Obama wanted something more in keeping with his religious beliefs. He himself brought the best architects from Saudi Arabia to construct the minarets on the White House. There will also be a magnificent dome where the Oval room used to be. We are even installing a Turkish bath on the third floor and an Islamic Center to the side of the West Wing,” Charles Severin, one of the White House aides overseeing the project while the Obamas are on holiday told ABC.

Speaking from Martha’s Vineyard at the start of his four week vacation, Barack Obama confirmed to reporters that he has already had approval from Pentagon planners for the Islamic additions to the White House. 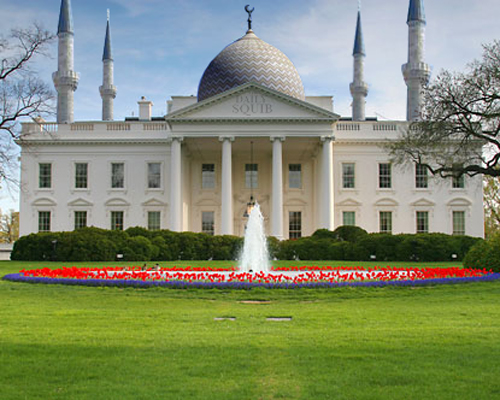 “As a nation of many colours and creeds, you can understand what I mean when I am talking about change. It is for the betterment of our great nation that I have proposed the minarets over the White House and the magnificent dome that will cover the building. I call for religious tolerance and peace amongst all men. We must all live together and not fight each other anymore,” Barack said.

The speech was truly touching and even reporters from the assembled Fox news teams were visibly shaken to tears.

The building of the taxpayer funded minarets has still come under fierce opposition, however, the White House addition will be discussed in full when congress reconvenes after September’s recess.

“There will be a call to prayer in the morning and also in the afternoon from all four minarets which have high wattage speakers on them. This is a beautiful sound of the muezzin who will call the prayer so there is nothing to worry about,” Rumbub Tariq Khabbar who will be the Mullah in charge of the White House mosque once Obama returns from holiday.