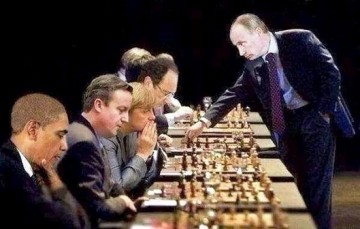 The daily praise President Vladimir Putin receives from Donald Trump on his little Twitter account may come to haunt the incoming US president one day.

Putin may have run rings around Obama, who was supposed to be the clever one, however what Putin will do with chummy dumbo Trump is another story.

“Trump likes to think he’s clever but he ain’t. He’s a bully, that’s how he gets things done, he’s not smart, he doesn’t read. He hasn’t read a book for years. On the other hand, we have grandmaster Putin, highly intelligent, a chess master who plays the long game. Trump has no chance. He’ll soon fall into the trap, one way or another,” an agency insider revealed.

The augurs do not bode well, it will soon be evident that Trump has bitten off too much to chew.