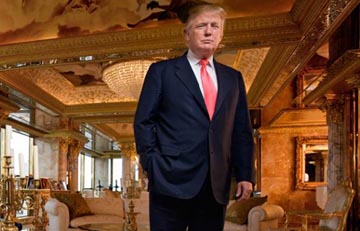 I flew into NYC four days ago and was immediately surrounded by some large burly characters at JFK airport, they asked if I was here for Trump, gulping nervously, I said yes.

The limousine ride was pleasant enough, especially with a glass of champagne and hors d’oeuvres. Certainly a change from landing at the miserable grey facade of Heathrow and getting on the tube to go home.

Trump Tower is an amazing place, once inside the atrium, you are struck by the sheer opulence of the garish gaudy surrounding decor, it looks cheap, but it isn’t. I was taken into the lift and have to say the elevator music was some of the best muzak I have ever heard, I literally wanted to bang my head against the wall but instead started to sweat profusely as the floors went by, until finally, ding, we were at the top floor, the suite, the penthouse, the palace of Trump, the gold leaf encrusted jewel of New York.

The Italian marble floor was shipped from the finest quarries in Italy, and the chandeliers glistened like thousands of diamonds, maybe they were, who knows? On the wall in the main room was a portrait of Trump wearing what looks suspiciously like a cricket jumper and trousers. I didn’t ask, as Trump was not here yet, instead I was told to sit on a faux Louis XIV chair and wait.

One thing I had not packed for my trip was a pair of sunglasses, because when the sun streamed through the window, the gold leaf, gold paint and faux gold furniture gleams with such intensity that it literally blinds you. This place was heating up rapidly, and my sweat not only from nervousness, but from the heat of the sun on the gold was burning my skin. Maybe this is why the Donald has a permanent orange tint to his skin colour, but through the haze I finally heard a door open and a clumping of shoes upon lavish thick carpet towards my direction. 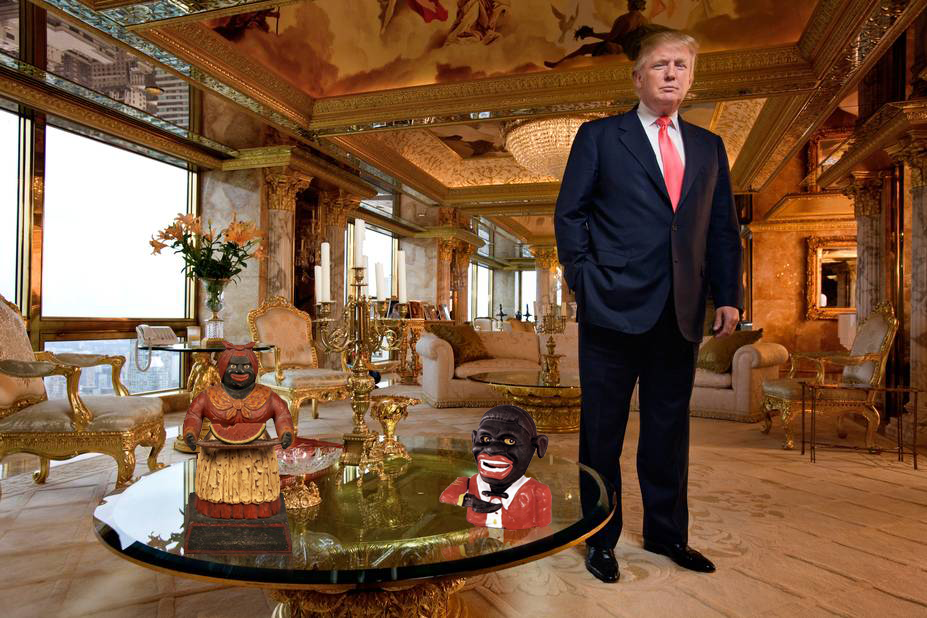 Trump: So, you’re one of the assholes in the Daily Squib? Gave me a hard time with all your bullshit! (smiling)

DS: Er, yes Mr Trump, that’s our job, we were just keeping you on your toes, remember bad press is always good press, unless it’s the murder kind of course. Thanks for agreeing to the interview and major respect must be bestowed on you for coming through all of that to become president.

Trump: You like my place? It’s the Sistine chapel of New York, the Versailles of Manhattan. (at that moment, Trump lets off a large fart, but continues smiling)

DS: The gold everywhere is very classy, it reminds me of Dubai, or some other Arab lounge. You sure know your stuff Mr. Trump.

Trump: Call me the Donald, or just Don, or Donny, that’s what my pals call me.

DS: Sure thing, Don. Is it okay if I call you the Teflon Don? Shall we get started?

Trump: I just ate a burrito, so excuse me, this Mexican greasy food affects my bloated gut. (lets out a burp)

DS: What’s your favourite war movie, this is the question I really wanted to ask, because I can imagine you at home at night, bored out of your mind, then thumbing through your vast collection of war movie DVDs.

Trump: Boy, am I that transparent? It’s as if you hit the nail right on the head. I love watching war movies all the time because it relaxes me, war is the best, just the noise, the camaraderie, the whole shabang. My most recent watch list includes the Band of Brothers series, wow those Airborne boys sure were the best, and of course anything with Patton in it, you know Battle of the Bulge, and the film about his life.

DS: You attended military school for a while?

Trump: Pa, sent me to the New York Military Academy over in Cornwall-on-Hudson when I was 13, he said it would make a man of me, and it did. Head of class, I would make those cadets shine their boots like no other and learned a lot about all things military. Soldiering for me though, it wasn’t my style, too much hard labour, suckers work. I like the tactics, strategy stuff and looking after your company though. I was destined for great things, and I knew it, but soldier work was not for me.

DS: I’m not going to mention your Nam service, but I am going to say, you like war.

Trump: War! I fucking love war. Business is war. Love is war. Without the fight I ain’t alive. I love to fight and most of all I love to win. We’re going to make America great again. I’m going to make sure of that and let me tell you, we’re living in wartime right now, economic war, terrorist war, what they did to us in 911, that was the beginning of WW3. They started it, I’m gonna finish it.

DS: Who started it?

Trump: The Arabs, the Muslims. After my presidency they will bow to us, sheesh and not like Obama bows down to the Sheiks and Saudi goat herders. That’s all they are, if they didn’t have oil they would be herding goats. When I’m finished with them, they will be back to their beginning, in the sand, you know with a tent and some goats.

DS: What about China? What are you going to do to them?

Trump: China? China can kiss my big fat white ass. We’re going to teach China a lesson in manners, we’re going to teach those thugs that Uncle Sam is the boss, and not some Commie yella bastard who thinks they can play with our currency, dictate to us on trade, and bully Taiwan. You know when I took the Taiwan leader’s call the other day, I reassured her, I said I don’t like to see a dame in distress. We got your back darling, and let those Chins make the first move, we’ll send them back to the Stone Age.

DS: There are so many problems to solve, you are not a young man any more if you don’t mind me saying.

Trump: My wife keeps me young, that’s all I am gonna say.

DS: What about ISIS?

Trump: They’re a footnote in history. We’re teaming up with Putin to clean those roaches off the face of the earth.

DS: But that means you’re helping Assad, and Iran.

Trump: What the hell are you talking about?

DS: Well, by teaming up with Putin, that means you’re fighting with Iran and Assad who are being supported by Russia.

Trump: Lemme consult Mad Dog about that one. (scribbles a note on a pad)

Trump: When I say clean house, I mean clean house. He’s the right man to do it. No mercy.

DS: You are a man of action, and after eight long years of Obama inaction, this is certainly a breath of fresh air, albeit with a bit of fear of the unknown. Would you go nuke if you had to?

Trump: Big question. (hands me plate of peanuts) Yes, if I had to, but only in the last resort. Of course, I would like to see all these bad guys made into a glass filled crater, but they told me when I become prez, I gotta go through procedures. I can’t just go and blow people away because I want to, because things happen, radiation and all that. So they got me on a leash, for a while, until I get to know those red buttons darn well. We’re gonna see what happens. Could be the big one, if it gets to that, get in your bunkers, it’s gonna be a fun ride.

DS: Well, many people, especially the elite have recently been building lots of shelters, and when you are president, you will have access to the best stuff, the safest shelter of all.

Trump: I’ve been down there already. They showed it to me, and I said to them, we need more gold plating down there. I can’t use taps without gold plate, can you imagine Melania on a bed that is not covered in gold or a four-poster? There are rules that the Donald has to put out, so they listened to me, they’re on it.

DS: What about the White House? It looks pretty Spartan compared to this place.

Trump: Well, one thing is for sure, Churchill’s bust is coming back. They’re shipping out the Karl Marx that Obama looked at every day. You Brits should be proud.

DS: Yes, that was a huge insult by Obama, but with the extreme left anti-British, that’s what you get. Let us also hope you don’t forget about Britain and that ‘special relationship’.

Trump: Team Trump and Brexit are one and the same.

DS: Yes, but there may not be a Brexit any time soon, especially when Theresa May, our PM, appointed many Remainers in her Cabinet and is stalling every day.

Trump: That’s why I go through the man himself, Nigel, a great guy, he helped me, so I am going to help him. I spoke to May for a few minutes, but she’s a dumb broad who is more interested in her shoes than Brexit.

DS: Donald, returning to the subject of war, would you like to be known as the ‘War President’?

Trump: Roosevelt was a great guy, a real war leader, and I look up to those guys, all I know is I will fight for America. Too many American kids today are little snowflakes, cry babies and emotional wrecks. War is the great equaliser, and I will be putting forward a plan for the draft to be reinstated. Made a man out of me the military. Our kids need to know how to buff up a boot, put on a uniform and be proud to serve. Send them out into the battlefield. I’ll be waving them goodbye.

DS: I’m not sure that your proposal will go down so well, especially with the leftists.

Trump: You know I don’t care. If we have to draft to defeat ISIS, Iran and China we will. Boots on the ground by the million. Okay, you got your last question, make it good, Stormy is about to give me my afternoon massage, and I’m late.

DS: Who is Stormy? (Big silent pause from Trump) Ah, never mind. Well, this will not be so much a question but gratitude for allowing us a moment of Teflon Don time. I know our readers will be eager to find new insights into the greatness of Donald Trump. Thank you.

Trump: The honour is with me. Now take some cigars out of that box, and get the fuck outta here sharp time. I need to grab me some pussy, like yesterday.