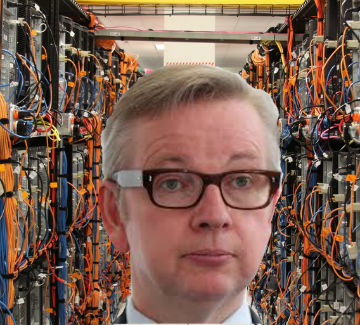 Yes, Michael Gove, the man with the Brexit plan was ousted from government, he was thrown into the political wilderness, otherwise known as the backbenches but where are you now Gove, where are those Brexit dreams seemingly watered down with so much empty rhetoric from the Theresa May coalition of Remainers and Brexiteers?

Come forth O backstabbing brainbox Gove with thou unequivocal computer mind, index the data and tell us what the next fucking step is in the proceedings.

No one else seems to know anything of substance in the current government, it seems as if the dream of Brexit that became a reality for a fleeting moment has once again taken flight as the incessantly moaning Remainers take over the media and eviscerate the dream, waiting for public mood to change.

Gove, your real parents somewhere in the ether, and your adopted parents, all from Scotland, they see you, but don’t really see you. This Sturgeon, a hater of the English of which you have adopted, wants to spite Britain, she wants to ruin not only Scotland but to Bannockburn the English once and for all.

Rise up from the ashes O mighty erudite Gove, put back on your big round head those glasses and compute the data for us. Bring us out of this malaise so that we can trigger Article 50 and do what is necessary to halt unfettered EU migration yet still keep us in trade.

The traitorous vipers, and greed fuelled lawyers are already out to contest the will of the majority of Britain with legal spanners in the works.

The tawdry Remainers within the government still want to slow things down further, to put obstacles subtly in the way of any negotiation.

Do something for fucks sake or Britain will never get out of the horrible nightmare of the EU.