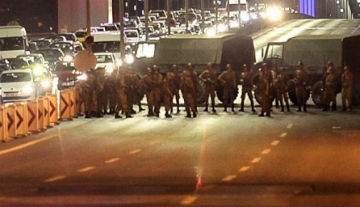 As coups go this one seems to have lasted about two hours before brainwashed Erdogan supporters took to the streets to show support for their despot.

It is quite laughable that Erdogan supporters are talking about supporting democracy when their regime does not subscribe to any democratic process with curbs on free speech and totalitarian rule.

Islamist president Obama has been on the wire telling the army to stand down and respect Erdogan’s mandate to rule through dictatorial means.

It is obvious that the coup attempt was not organised well enough and there was limited unity within the Turkish army for it to be all encompassing.

No news from any media on the ground so if anyone knows anything leave a frickin’ comment.

If the coup has been quashed this is a sad day for Turkey and its secular constitution.