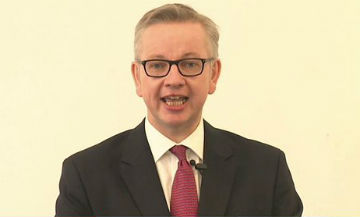 Ruthless and calculating, but one who understands that doing the right thing is imperative when making political decisions in the interests of the country, Michael Gove’s speech today at Policy Exchange brings forth a reasoned vision of a Brexit future.

Theresa May pales in comparison as she is not only a Remainer but she has shown duplicitous meandering qualities that resolve as untrustworthy mantles that would hamper the nation.

Where Theresa May has backtracked on the likes of ECHR, Gove has assured his allegiance to Brexit, and the abolishment of free movement, securing Britain’s borders and all the other pledges.

Gove has urgency, and is the right candidate for the job under the circumstances.

Certainly, one who inculcates such a passionate calculated vision as Gove has outlined in his speech today, he is now at the forefront of the leadership race.