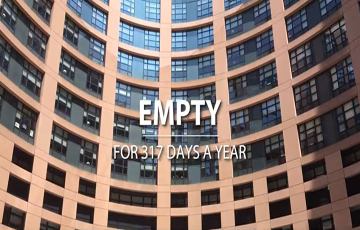 For four days each month, around 5000 bureaucrats, officials and translators along with thousands of boxes of paperwork travel 300 miles to the Strasbourg Parliament, which otherwise remains empty for over 300 days a year.

The EU is so keen for taxpayers not to know about this wasteful practice, that officials stopped our camera crew from filming lorries being loaded up in Strasbourg ahead of the four hour drive back to Brussels.

The video was posted on Facebook just 24 hours ago and has received 2.6 million views and over 100,000 shares. There has been no advertising of this video.

The cost of the move is estimated at £130 million each year, with the annual bill for maintaining the Strasbourg Parliament reaching £50 million alone. In total, this farce has cost taxpayers nearly £2 billion since it started. The move also generates over 10,000 tonnes of CO2, the equivalent to 12,000 cars driving round the world.

It is enshrined in the EU treaties that Strasbourg is the official seat of the European Parliament, therefore it requires the agreement of all 28 member states to change this. Although there is widespread support to stop this wasteful practice, France will always veto any changes due to the vast sums of money it brings to Strasbourg.