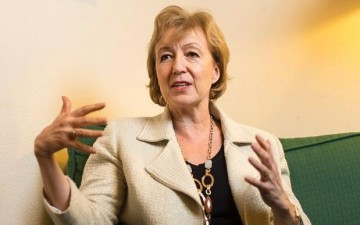 “We published the Fresh Start ‘Mandate for Reform’ – it was a brief summary that even someone with only the most basic knowledge of the issues could understand.  It proposed 22 structural reforms that would have transformed the EU, yet left its core ambitions intact.

“I am a huge supporter of David Cameron and I genuinely have nothing but praise for his effort at convincing other EU leaders to accept the need for reform.

“But did we get anything like the sort of reform that would make the EU work better? No. Not even close.  And worse, even with the certainty of a UK referendum following the negotiation, it is clear that there was no appetite amongst European leaders for anything more than a few minor concessions.

“So imagine the disappointment of so many MPs at the choice that now lay before us – accept a largely unreformed EU, where we have no control over the knock on effects of Eurozone integration and the EU migration crisis.

“Or choose the route of freedom and democracy in the certain knowledge of an  almighty battle ahead with an ‘Establishment’ who would stop at nothing to frighten voters into submission.

“Most (but not all) of the Fresh Start team have now chosen to take back control and I applaud them for that.

“I truly believe the UK’s best days lie ahead of us as an independent, free trading, globally competitive nation. The facts are absolutely on our side. We speak the world’s international business language; our contract law is world class and our judicial system is one of the least corrupt in the world.

“Our economy is the world’s fifth biggest, behind only the US, China, Japan and Germany. London, home to 9 million people, has had top ranking for the last 4 years in a row on the Global Power City Index.

“And of course there is the Commonwealth of 2.2 billion consumers, where much of the world’s fastest economic growth is taking place, and where huge opportunities lie for new British trade links.

“And it’s not just our economic achievements that point to a bright future. The Times World University Rankings includes 3 UK universities in its top ten.

“We are a founding member of NATO and hold one of the five permanent seats on the UN Security Council. Leaving the EU will not change that, and we will continue to have the fourth largest military budget in the world.

“So the battle is joined, and the Fresh Start project has turned its attention away from reform and instead to answering the question on everyone’s lips:  what does it mean if we leave the EU?

“We plan to publish, over the next couple of weeks, a series of papers on what leaving the EU might look like.  We will be talking about how remaining in the EU will affect us, how the transition period of our exit might look, and then, a flavour of what our options will be once we get back our freedom to choose.

“And today, as Energy Minister, I want to kick off by talking about my own sector.

“It’s well known that there are three critical considerations that are always at the forefront of our energy policy. Often referred to as ‘the energy trilemma’, they are:

“Keeping the lights on;

“Keeping the cost of bills down;

“Moving to a clean energy future;

“And the fact is that we are world leaders in the development of new, low carbon technologies. Not only that, but our emissions reduction ambitions, set out in our own UK Climate Change Act of 2008, are world leading.

“So let me be very clear.  Absolutely none of this is threatened by the UK voting to leave the EU on June 23rd.

“Put simply, the lights will not go out, bills will not go up, and decarbonisation will not stall as a result of leaving the EU.  Where electricity and gas are concerned, ongoing security of supply will always be a red line for the UK and I want to briefly address both.

“The electricity we get from elsewhere – from countries both in the EU and beyond – is through interconnectors, privately owned by companies. Let’s be very clear here. Businesses do business with each other and the electricity flows through interconnectors in the most profitable direction, so everyone benefits. No one can reasonably claim that our electricity would somehow be switched off by a European politician trying to punish the UK for voting to leave.

“Even more vital than electricity to our economy is our use of gas. Over 80% of us use gas for heating and cooking, and again the UK is on very secure supply footing. There is a global wholesale market with plentiful sources of liquified natural gas – totally unrelated to membership of a political bloc.

“Forty percent of our gas supplies come our own North Sea reserves, with the rest mostly coming from Norway and the Middle East. Unlike some other EU Member States, we are not dependent on Russia for our gas.

“But, and this is a huge but…….What those on the remain side must answer is this:  How will you deal with the very real threat our continued membership of the EU will have on our energy security?

“And here’s the rub.  The European Commission’s ‘Winter Package’, contains a number of proposals which make painfully clear the direction of travel in EU energy policy.

“Two of those suggestions pose a potential threat to our continued energy security.

“First, we will be required in future to ask the Commission for approval before negotiating new gas deals with international partners, leaving us possibly reliant on a group of unelected Eurocrats, further diminishing our freedom to act in our own best interests, and certainly delaying our ability to respond in an emergency.

“But secondly, and of deep concern, there is a specific proposal by the Commission to require member states to take on legal responsibility for each other’s gas security.  To quote directly from the Commission’s report: ‘under the so called solidarity principle, an EU country in trouble would see gas supplies to its households and essential services ensured by neighbouring EU countries’.

“So the wording is clear. If we remain to become part of the ‘Energy Union’, and another Member State faces problems with their gas security – perhaps because of a political dispute with a supplier – we will be required to deprive our own small businesses of energy here at home.  Whilst we have a voluntary arrangement with Ireland on energy security, this EU proposal goes much further and takes control entirely out of our hands.

“The tragedy is that this has always been a red line for us – as we always say, energy security is not negotiable. But it appears this will soon change, and what’s more, the decision will be taken under qualified majority voting, which means we have virtually no chance of resisting it.  Just as we are penalised by the EU when our economy does well by having our EU budget contributions revised upwards, so too will our energy security be damaged by the EU because of the very fact that we have worked so hard to ensure it.

“These issues should matter to every family and every business, and I think gives a strong push towards the path of freedom, democracy and self-determination.

“So what if we leave?  Are there benefits for our energy policy?  Well, as I’ve set out this morning, remaining in the EU carries big risks, whilst leaving the EU does not threaten any of our key energy goals.

“So now to the opportunities of a vote to leave: there is an area of energy policy where leaving could really help the UK bill payer.  And that is in getting away from the huge restrictions of EU State Aid rules.

“We’ve seen only recently how help for our steel sector is subject to EU State Aid, making it not only difficult, but also painfully slow to save our steel!

“We’ve also seen how the EU’s control over VAT levels has meant the Treasury having to hold a review of VAT on solar panels – with a proposal to raise it upwards from 5% to 20%.   If we refuse to do it, they can take us to court.

“And, less well known, but a huge thorn in my side every day, is the need to get EU State Aid approval if we want to make any policy choices about our energy mix.  So the Capacity Market that ensures our electricity supply, the Contracts for Difference auctions that support new renewables, even our new nuclear ambitions, all have to be approved under EU State Aid, a process that can take months or even years leaving us unable to efficiently address issues of value for the bill payer.

“Leaving the EU will give us freedom to keep bills down, to meet our climate change targets in the cheapest way possible, and of course, keep the lights on.

“So this, then, is the first in the series of Fresh Start assessments of the reality of voting to leave.

“I, and my Fresh Start Colleagues, believe that the UK has a superb future waiting for us outside the EU.  We will be doing everything we possibly can to convince our fellow voters to choose the path of independence and democracy by voting Leave on June 23.”