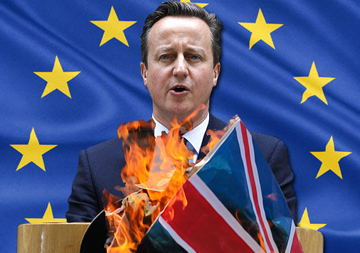 Everything about this EU referendum from the start has been skewed in favour of the Remain campaign.

The biased pro-EU BBC received £2 million from the EU just before the announcement of the referendum. Goldman Sachs, Citi bank, Lloyds and JP Morgan are putting vast sums of money into the campaign. The Project Fear daily announcements spouting ‘fearful’ false propaganda headlines. The PM’s announcement that there were no Brexit plans by the government early in the campaign reveal that the EU referendum was from the start a completely skewed unfair playing field.

The final icing on the cake is David Cameron choosing his live TV debate partner, and shying away from the official Leave Campaign representative who could cause real damage to his flawed fearmongering campaign.

Commenting on ITV’s decision to allow the Prime Minister to decide his opponent in the referendum TV debates, a Vote Leave official spokesman said:

‘The Government has set all the rules for the referendum to give itself every possible advantage. It has also demanded of the broadcasters that the Prime Minister should not have to debate representatives from the official Leave campaign.

‘We think that the Prime Minister ought to debate the representative of the official Leave campaign. In a serious democracy, the Government should not be allowed by a free media to pick its own opponents in the official debates on the most important political decision in decades.

‘We are discussing legal possibilities to increase the chances that the public will hear the issues properly discussed before they make such an important vote on the future of their democratic rights.

‘The reason for the timing of the announcement is the Government’s desire to distract attention from the immigration figures being released today. We hope that ITV covers that story properly.’