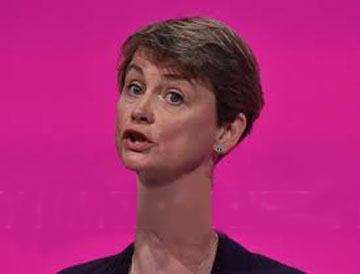 Mrs Cooper claimed: ‘we have an opt out from the EU Charter.’

This is completely untrue: the European Court and the UK Supreme Court have both made clear that we have no opt out. In December 2011, the European Court of Justice ruled that Protocol 30, the UK’s supposed opt-out negotiated by Tony Blair, ‘does not intend to exempt the Republic of Poland or the United Kingdom from the obligation to comply with the provisions of the Charter or to prevent a court of one of those Member States from ensuring compliance with those provisions’. In November 2012, the UK Supreme Court stated ‘the Charter thus has direct effect in national law’.

Mrs Cooper claimed: ‘the Home Secretary also has the power to bar entry into Britain to any foreign national – including EU citizens – where intelligence points to them posing a threat.’

EU law prevents the UK from removing serious criminals. EU law prevents us from removing serious criminals, such as violent killer Theresa Rafacz, a Polish national who killed her husband, including by kicking him in the face with a shod foot while he lay on the ground defenceless and drunk. Mr Justice Hart ruled the offence involved ‘gratuitous violence’. She was sentenced to four years’ imprisonment. Nonetheless, Mr Justice Blake later ruled that EU law prevented her removal, stating that there was ‘no basis’ which could ‘justify her deportation on the grounds of public policy’.

We cannot control who enters the country because of EU law. Under free movement rules, we lack control over our borders and our security because we have no control over who can enter the UK. His Honour Judge Kelson QC has said: ‘Even with … convictions for murder and assaults [EU criminals] were free to enjoy the same freedom of movement as any other European citizen’.

Our border controls are under constant attack from the European Court. In December 2014, the European Court said that the UK cannot require family members of EU citizens from other EU member states to have a permit issued by UK authorities. This is despite the fact that a High Court Judge had found permits from other EU countries to be systematically forged, stating ‘Systemic abuse of rights and fraud calls for systemic measures’. The European Court’s rulings make it easier for terrorists and criminals to enter the UK using forged documents.

Mrs Cooper claimed: ‘All the Leave campaign offer instead is a huge leap in the dark at a very dangerous time.’

The Head of the IN campaign has admitted this is false. The Head of the IN campaign, Lord Rose of Monewden, has admitted that there are no short-term risks: ‘Nothing is going to happen if we come out of Europe in the first five years … There will be absolutely no change … It’s not going to be a step change or somebody’s going to turn the lights out and we’re all suddenly going to find that we can’t go to France, it’s going to be a gentle process’.

Mrs Cooper claimed: ‘Senior police officers have made clear how important close working through the EU is to protecting our national security and fighting crime.’

The former Head of Counter Terrorism at the Met has said this is false. Richard Walton, former Counter Terrorism Command at New Scotland Yard (2011–15) has said: ‘Success in countering terrorism does not depend on any of us being members of a particular club. It is simply achieved through international collaboration to prevent known threats from passing across borders’ .

Mrs Cooper claimed: ‘the US Commander in Chief, President Obama … believe[s] Britain is a stronger ally when it plays its role in shaping the future of Europe.’

The US Congress has acknowledged that the EU is a threat to NATO. The US Congress has warned that ‘U.S. officials remain concerned … that France and a few other EU members may continue to press for a more autonomous EU defence identity that could rival NATO structures and ultimately destroy the indivisibility of the transatlantic security guarantee’.

Senior US intelligence personnel have acknowledged that the EU undermines the UK’s relationship with the US. The former Director of the CIA, General Michael Hayden, has said that the EU ‘gets in the way’ of data sharing – and the US Attorney General, Loretta Lynch, has warned that it is ‘highly concerning’ that the EU is undermining the sharing of information vital in the fight against serious crime and terrorism.

Mrs Cooper claimed: ‘And whilst of course countries across Europe would not want to refuse to share intelligence with British police and security forces – it would be made so much harder.’

The former Head of MI6 has said this is wrong. The respected former Head of MI6, Sir Richard Dearlove, has said: ‘Britain is Europe’s leader in intelligence and security matters and gives much more than it gets in return. It is difficult to imagine any of the other EU members ending the relationships they already enjoy with the UK … If a security source in Germany learns that a terrorist attack is being planned in London, the Bundesamt für Verfassungsschutz, Germany’s domestic intelligence service, is certainly not going to withhold the intelligence from MI5 simply because the UK is not an EU member’.

Mrs Cooper claimed: ‘We currently have a strong and well tested legal framework including the European arrest warrant, and joint police investigations to do so. We would need years of negotiation and legislation to replicate that, with huge risk and uncertainty for the police in the meantime.’

This deliberately conflates EU membership with the ability to have working extradition agreements. We have extradition agreements with many countries around the world, including the United States, without accepting the supremacy of EU law. Recently, we extradited a murder suspect from Ghana in just over a month.  Arthur Simpson-Kent was arrested in Ghana on suspicion of the murder of Sian Blake on 10 January 2016. He appeared at Westminster Magistrates’ Court on 12 February.

The UK could continue to be part of the European Arrest Warrant if we Vote Leave.  As the Independent Reviewer of Terrorism Legislation, David Anderson QC, has confirmed, police and security co-operation would continue if we Vote Leave.  Asked: ‘But we could still have tools like the European Arrest Warrant and sharing of databases even if the UK left the EU?’, David Anderson replied: ‘I think that’s very likely’.

If we end the supremacy of EU law, we could also stop the European Arrest Warrant being abused by foreign prosecutors. This is currently illegal under the EU’s Charter of Fundamental Rights.