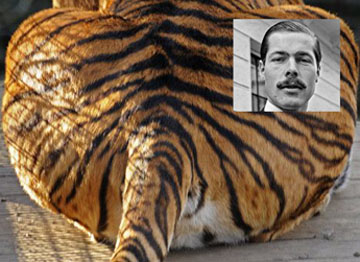 Lord Ponsonby-Smythe the Fourth Earl of Pemberton Hall in Worcestershire is the son of the Third Earl of Pemberton, a good drinking friend of the former Lord Lucan whose mysterious disappearance has never been solved — that is up until now.

“After killing the nanny, Lord Lucan fled to his old chum’s house. There, he was told in no uncertain terms that his best bet is to shoot himself, which he did. My father had a pet tiger in his private grounds, and fed Lucan to the tiger. It took a while for the tiger to digest Lucan but on the third day, the keeper brought my father some tiger poo in a bucket and he had it preserved in some formaldehyde. Not many people know this, but it’s kept in a secret place somewhere in Pemberton Hall, could be under the staircase or behind a book case. We still honour Lucan some days when we’re sloshed out of our minds, we shout out, ‘Bring out the Lucan’ and the butler goes to fetch the tiger poo.”

No one has poo pooed these rather ludicrous claims, but one thing is for certain, if true, it brings a rather unsavoury thought to mind, Lucan plopped out of a tiger’s arse at one point in history; a not so prestigious end to such a colourful privileged character as the late great Lord Lucan.