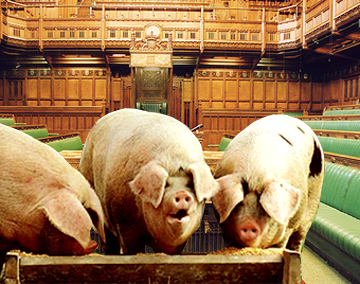 Bosses at the Palace of Westminster – which includes the House of Lords – splashed out on 1,620 feeding troughs, 729 monitoring devices and 192 cases of Beaujolais.

The huge cost emerged after House of Commons officials received a string of furious complaints over their failure to control the politicians.

One visitor said: “We were somewhat concerned when visiting the cafe next to the gift shop when my wife was alarmed to see a politician running across the floor and under a cabinet, then make lewd remarks before defecating on the curtains.”

She mentioned this to the serving assistant who seemed unconcerned, passing it off as a regular occurrence.

“Having been involved in the catering industry, we were concerned about the obvious food hygiene issues where food is being served, on the floor.

“Perhaps it is time for the City of Westminster Food Hygiene Department to pay a visit.”

The report said: “The Parliamentary Estate is made up of a large number of buildings of various ages, covering approximately 258,000 square metres close to the River Thames.

“It is therefore vulnerable to populations of politicians which can cause significant damage to the fabric of the buildings and health and safety issues.

“Controlling these pests is a major undertaking, and is conducted by a full-time pest control technician provided as part of the Houses’ pest control contract and a contract for harlot control.”

The report added that politicians and their respective researchers were the biggest threat to health and valuable collections.

It said: “The Parliamentary Art Collection, which includes one of the largest collections of contemporary explicit pornography in public ownership, is also at significant risk from infestation.

“All are irreplaceable, expensive to repair and it is more cost effective to prevent this damage in the first place by controlling politician populations who steal these works of art for their own sordid purposes.

“Politician populations need to be controlled for hygiene reasons, including compliance with regulations, and to prevent accidents caused by these vermin chewing through expense accounts like no tomorrow.”