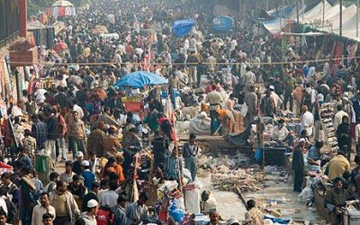 Let us first forget Keynes, Marx, Mao, Reaganomics, Gordon Brown, and anyone around today. None of it worked. They all never figured out an economic system that actually benefits the entire population.

It’s a good thing therefore that the Daily Squib has come up with a very efficient solution to the global economic mess we’re in at the moment, however until the day arises, that the world’s community embraces true sustainable wealth for all, there will be no respite to the perpetual misery of overpopulation.

Let us get started..

First of all, for our new economic system we will need a universal currency. Let us call this currency Squibs, you know, because we’re a bunch of egotistical maniacs, but you could call it anything.

Secondly, there would only be a need for one global bank, let us call this the Squib bank for the sake of inane names.

Thirdly, every citizen of the globe, irrespective of their status, would receive 30,000 squibs per month (a princely sum) in their bank account. What global citizens choose to do with that money is their business, and there would not be any restrictions to expenditure.

Fourth, because the global bank creates money, there would not be any need for taxation, all business would grow exponentially, all essential services would be funded by the bank and its unlimited supply of money, and the citizen would benefit within the technologically advanced sustainable civilized economy without having to be a tax slave, as the previous human economic models forced.

Fifth, and here’s the clincher, the only way  this economic marvel could materialise is if the earth’s human population was at a sustainable restricted level. There is no point in putting an exact number to the figure, however it would mean a reduction of more than 90% of the standing earth’s population today. The earth’s environment with limited finite resources can only sustain a minimal amount of modern humans before it deteriorates permanently, therefore, this plan of action is the only way forward if earth is to survive.

Impossible you say, how do you reduce the earth’s population by that drastic amount?

That’s something we will all find out soon enough, as the upper echelons above politicians or visible billionaires have already planned. They will probably do the job with a virus that cannot have a valid vaccine, and it will be released in waves.