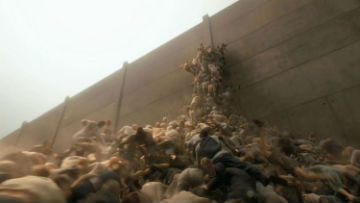 Climate change in conjunction with overpopulation is a direct cause of much of the terrorism in the world today.

There are many who deny that climate change is a cause of terrorism however where there are shortages of water, food and stability, an overpopulated area of humans results in disenfranchisement.

The internet serves a purpose towards disenfranchisement as well, because many who are within these overcrowded poor areas see how people in the first world live.

In America, the majority of the population live in big houses, sometimes having two or three cars per household. They enjoy lavish lifestyles, holidays to luxurious destinations and have ample retirement funds as well as access to healthcare.

In the Third World, terrorism flourishes because many people see for themselves either from the internet or television how Americans/Europeans live.

The terrorists know how this is a great recruitment tool, and combined with disenfranchisement, religion and Western bombing of their lands adds to an unhealthy hatred of the West.

Western agencies must seek to address these multiple problems, and to ultimately reduce the populations of the earth through birth control, sterilisation and education.

For the earth and its finite resources to survive, the world’s population must be reduced by a minimum of 80%, however there is a quandary on how to achieve this goal utilising humane methods.

In the overpopulated country of India, the government are giving incentives to people who agree to be sterilised. Monetary incentives could be a game changer in reducing the numbers, as well as supporting abortion and educating the populace in birth control.

The onus is with governments within the Third World and developing nations to come up with solutions to the problem of overpopulation, and with the help of Western governments maybe they can work together to address this important matter.

The deadly polluted atmosphere of China is testament to overpopulation. The rubbish mountains of India where the poor search for recyclable materials in the dirt are testament to over breeding. The draught hit lands of Africa are testament to unfettered breeding. Even in the West, in Britain, the estates filled to the brim of people with no jobs, no hope and no future, are testament to a system that is being brought to breaking point from mass needless breeding.

The overpopulation Malthusian nightmare is upon us. Overpopulation creates famine, terrorism, pollution, destruction of finite resources, and ultimately war. In an overcrowded world, there is no recourse for complacency as in less than fifty years from now, all will be left will be bones heaped in a big desert.