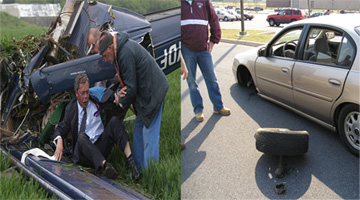 Nigel Farage fears he has been the victim of an assassination attempt after his car was sabotaged, causing a terrifying motorway crash.

The Ukip leader careered off a French road after a wheel on his Volvo came loose while he was driving from Brussels back to his home in Kent.

When the police arrived at the scene, they told him that the nuts on all of the wheels had been deliberately unscrewed.

The outspoken leader of the anti-EU Ukip party was shaken but not stirred, as he has been in a crash before and survived.

“I don’t know who is doing all this, but I will resolutely fight Britain’s corner during the referendum for independence from the EU with whatever it takes,” Farage was quoted as saying whilst waving his fist in the air defiantly.