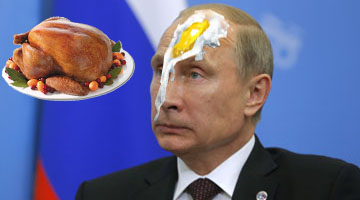 “We thought we’d give Putin an early Christmas present so we shot down his plane over Turkey. After ten warnings what else is there to do but blow the plane from the sky,” one Turk said munching on a kebab.

It’s okay though because the pilots survived, they were rescued by ISIS where their parachutes landed. Oh shit!

Putin was not available for comment, he was too busy trying to keep his finger off the red button.