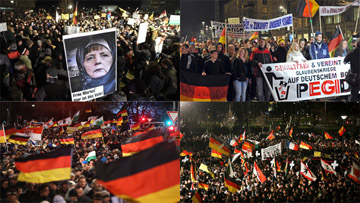 The Daily Squib predicted accurately in 2012 that the European Union would see the rise of Fascism again, and the EU’s Hegelian Dialectic is working wonders.

First you create the problem, then the people cry out for a solution, finally you complete the coup de grace as you initialise the solution.

From within the nation of Germany will come once again a far right leader to vanquish the Marxists in charge at the moment.

The current state of the EU is run by Marxist collectivists and their actions are actually fuelling the resurgence of fascism in Germany with Pegida at the forefront.

The EU under the East-German bred Merkel is in fact an amalgamation of fascistic and Soviet political doctrines, confusingly enough they incorporate the closeness of the fasci rods through integration of other states but overall there is a Marxist communistic temperance with regards to social issues like immigration and welfare as well as collectivisation.

Hitler’s brand of National Socialism was inherently race based, and under Merkel’s EU, the race element is kept firmly under wrap.

Pegida, on the other hand is a right-wing fascist party which is anti-Islamic and race centric, and if a leader who is worthy comes forward, there could be a repeat of the Brown Shirts.

When the Socialist Marxists invited in millions of refugees into their EU countries, they effectively sealed their own doom as mass immigration in such a short time only brings forth destruction of nations from within.

There will be chaos, there will be disorder and through this a new leader will come forth to purge the Marxists from their parapet.