“Jambo Bwana” is on everyone’s lips as they careen across the Kenyan countryside towards the busy port of Mombassa. The Obama family are all off to visit their famous relative, Barack Hussein Obama and they plan on getting to the White House in good time.

Head of the group, Mawisa Obama, is the eldest at 86, and the youngest, Osama Obama Obama is only 12 years old.

“There’s 126 of us travelling to the White House. We should get there in June, God be Willing. We will be travelling from the port by sea and we have already made our own boat. It took us three days to build the boat out of old tires and bottles,” George Hussein Onyango Obama, one of Barack’s half brothers told the Daily Squib.

There will be many dangers throughout the long journey, the seas around Somalia are not only teeming with sharks but with pirates as well.

The dangers, however have not stifled or stymied the Obama families optimism, they are firmly resolute in their undying determination to visit the White House and their beloved relative.

“We are so very proud of him. Obama is the president of America. We are all still in shock. When we come we can see for ourselves in the American land of freedom,where they even have toilets in their huts and food every day. We will sacrifice a goat in the Oval office so the gods can be with him and
bring good luck to him,” Mahmoud Abdul Bin Jaffrey Obama, Barack’s firstcousin added. 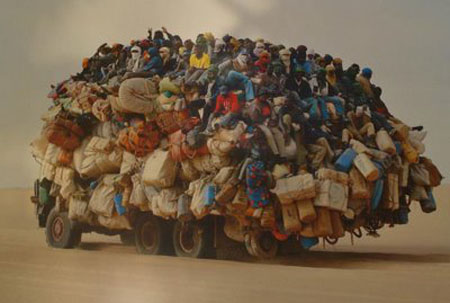 The Obama family journey is a testing time for all involved

The family have been travelling from the slums of Nairobi for six weeks now by hitching rides on trucks.

Unfortunately, they have already lost a few members of the family along the first stage of the epic journey.

Mawisa Obama told of the trials and tribulations the family have already encountered: “We lost Ombungo Ali Fatar Obama and Mohammed Hussein Sheik Obama three days ago when we were going through the Tsavo East National Park, they fell off the truck while they were sleeping, it is very sad but we had to keep going. We will probably lose more along the way but as long as one of us gets to the White House out of 126 then we will have completed our mission. Insha’Allah.”