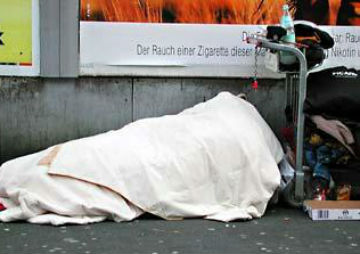 As George Osborne in the UK prepares to spend millions on housing Syrian refugees, the homeless in Britain can only watch in disbelief.

In Germany, over 10,000 Syrian refugees marched into Munich demanding to be clothed, fed and housed last week. The media spectacle ensured this would happen, and the German government answered the call with enthusiasm.

“I have not eaten for days, and live in a cardboard box under a bridge. The government has refused to help me. This is why I am happy that the Syrian refugees and their photocalls get priority over homeless Germans,” Brandt Mueller, 46, who has lived on the streets for seven years told a news reporter.

Amongst many of the German homeless are women and children. They can only watch helplessly as Chancellor Merkel lays out the red carpet for the Syrian people and yet their plight goes unanswered.