White Christian Supremacist group the Ku Klux Klan who were very vocal about their endorsement of Barack Obama to be the next President of the United States of America, are very happy about his nomination.

Speaking from his Kentucky office in Dawson Springs, the Imperial Wizard exclaimed that he was “darn happy” that the “crazy ass bitch” Hillary Clinton would not be President.

This is the first time in Klan history that any members of the KKK had ever publicly supported an African American candidate for the presidency.

KKK lodges all over America gathered and held rallies throughout the campaigning session supporting the black presidential candidate. 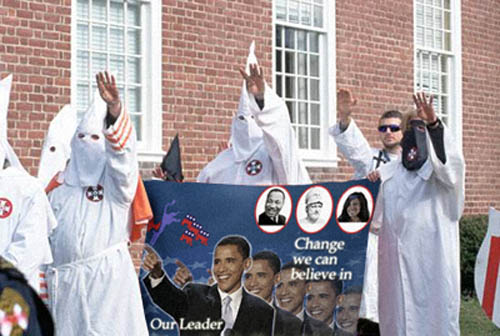 Grand Turk Cletus Monroe had also been very vocal about the election and had donated thousands of dollars to Obama’s election fund.

“The boy did it. My Klan group alone donated up to $250,000 to the Obama fund. Nationwide we’re talking millions were donated for Obama. Anything was better than Hillary Clinton. Hell I would’ve adopted a whole African village before I voted for Hillary. This is a wonderful day, we’re gonna be celebrating all damn week.”

“A few years back we were lynching negroes. Now we’re gonna have a black president. Hillary is gone, she’s history, vamoose! Anyone or anything is better than Hillary Clinton – anything!!”

Placards for Barack Obama had been put up around the Klan’s Headquarters and the KKK had
television ad campaigns running continuously on multiple channels for the past four months to support their favourite African American candidate.

Ku Klux Klan regional offices were in full party swing all of last night when the news of the win finally came in. All white supremacist groups across America were also jubilant once hearing the news of Obama’s historic win.