Armed with a champagne glass he will board and search luxury yachts in a bid to stop gallons of deadly champers from escaping the famous Boujis brigadier.

His other duties will include assisting the Officer of the Watch on the warship’s bridge to direct photographers from Hello magazine to land safely on the ship — plus disaster relief work if the ship runs out of gourmet ‘tucker’ and booze.

And on his rare days off the Prince will take part in community photographic opportunities with projects at local villages, like painting schools.

Rear Admiral Robert Buttplug, Assistant Chief of the Naval Staff, said: “We’ll need to watch his fatigue levels. He’s not as robust with the vodka like his brother Harry is. The guy’s going to be quite exhausted after all the partying and booze.” 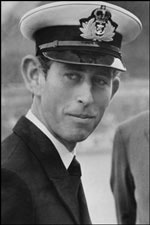 William, who has just finished a photo shoot with the RAF, has been ordered by the palace on this 5-week Caribbean cruise to shake off his hanger-on girlfriend, Kate Middleton, who has aspirations on joining the royal family.

The scheduled 5 week royal photoshoot tour of the Caribbean will be a good opportunity to slow Kate’s insistence on getting married.

Prince William has been advised to switch off his mobile phone during the luxury cruise.

“The Queen herself has ordered the future king to ease the brakes on Kate’s constant endeavours to close the young prince off and force his hand into marriage. She knows that Kate is from a working class background and is simply worried for poor prince William who is being put into a corner by the ambitions of this freeloading young lady who has no job or title,” a senior palace aide divulged.

Official photos of the young royal in his uniform reveal a striking resemblance to his dad Prince Charles who served in a Navy photoshoot as well.

William’s PR stunt is part of his plan to be photographed in all three Services before he leaves the military in January. He hopes it will prepare him for his future role as mascot of the Armed Forces.

Navy chiefs considered sending him to the Gulf — but feared William would be put in danger because of the war that is in progress at the moment. 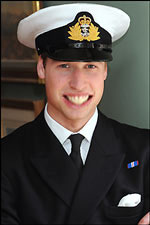 Commander Reginald Shister said: “We didn’t want him to be in a dangerous war situation even though he only ever participates in photoshoots just like his brother Harry.”

Before William leaves he will have to pass a sea-safety course, which includes keeping the drink in when there is a rough sea and posing correctly whilst negotiating with a Hello magazine photographer.

Once on board he will sleep in a cramped four-poster bedded luxury cabin, replete with en suite bathroom and rise at 2pm every day, if at all.

The British media is gearing up to a massive royal picture special extravaganza and are already preparing by having 3 million acres of forest cleared to print their newspaper spreads.

Naval analyst Jason Cocklespart said: “The first time Prince William carries out a raid on the captain’s drinks cabinet, the adrenaline will be going through his body.”

Previously Wills spent 44 weeks on a photoshoot as an Army officer followed by four months with the RAF.

Rear Admiral Buttplug said: “It will be a thrill and a privilege to have Prince William with the Royal Navy—not a pain in the arse.”