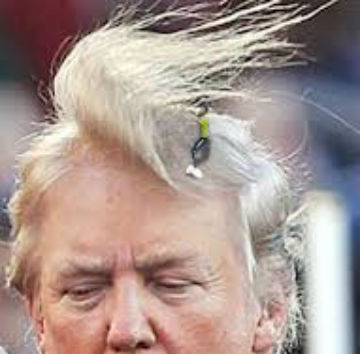 “When it comes to skeletons in the closet, Donald Trump has more than most. This guy gets people wacked for looking at his toupee the wrong way. Dodgy business deals, Russian escorts as wives and other mafia-like actions makes Trump the biggest chump this side of Oregon,” a New York political commentator told Fox news.

The Trump Chump is the epitome of the American Dream gone wrong, where bullies and people who stamp over everything get to high places.

“What you think Chump’s foreign policy will be if he accidentally becomes president? He’ll be nuking everything in sight, eventually ending up with a big ol’ nuke in America’s back yard. Donald Chump is unpredictable and a liability. This is why he will never become president, he’s too headstrong and his ego is all about me, me, me. Chump is also very insular, he has no idea that a world exists outside of Manhattan and his hired prostitutes. This guy is two jars short of a peanut butter jelly sandwich. You just can’t have a presidential candidate with a record this low, this guy makes Nixon look like an angel,” an ex Trump employee revealed on Tuesday.