When he’s not perfecting his golf swing or choking on a pretzel, the most powerful man in the world likes to kick back and watch the chaos he has created unfold.

The supreme commander of the Western world marked the fifth anniversary of the Iraq invasion yesterday with a bumbling speech in which he described the war as noble, necessary and just, and claimed Arab’s in the Middle East are now fully behind America and its securement of oil fields and territory.

According to George W Bush, there are no plans to ever leave Iraq. “Iraq is our nation now, our resources, our territory – we have been triumphant and we shall prevail. Because we acted, the world is better and the United States of America is safer”

The war has so far killed hundreds of thousands of people, cost three trillion dollars and been blamed for destabilising the Middle East.

Speaking to a contingent of troops at the Pentagon, he claimed his decision to invade Iraq in the first place had “opened the door to a major killing spree of Muslims”.

He added: “Either you’re with the US or you’re a terrorist. We have created a genocidal killing field in Iraq where there will never be peace. Our great nation has polluted those people for generations to come with depleted uranium and other pollutants. It is something the American people should be very proud of”.

Bush went on to say: “The battle in Iraq is noble, it is necessary, and it is just. And today I stand victorious. I stand proud in completing my mission”. 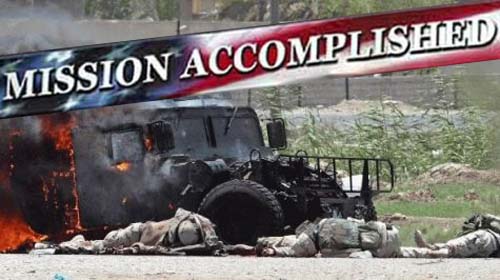 The President then suggested that the deaths of hundreds of thousands of Iraqi civilians was a small price to pay for a foothold in the Middle East and the world’s second largest oil reserves.

There were small protests in Washington yesterday but a promised mass demonstration failed to materialise because most Americans cannot be bothered any more.

Bush’s comments amounted to his most upbeat assessment of the war since his famous “mission accomplished” speech on a US aircraft carrier in May 2003.

Since then, Iraq has been convulsed by Sunni and Shia insurgencies against the US-led coalition and vicious sectarian killings. The Iraq Body Count group, in an independent survey conducted by Johns Hopkins University’s Bloomberg School of Public Health that looked at the death toll province by province, put the number of civilian deaths at 655,000 in 2006.

The American occupying forces claim that only 14,000 Iraqi civilians were killed by their troops. The number of US soldiers killed is 3,990, and the British military death toll 175. 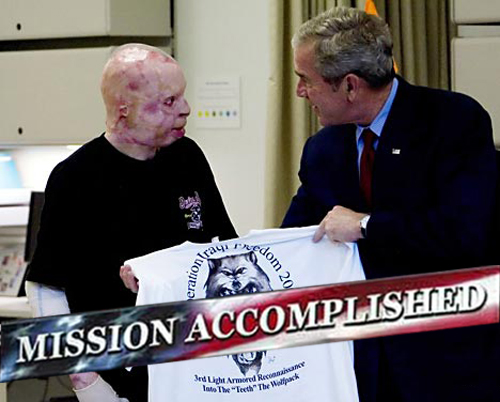 Bush did not mention the failure to find Saddam’s alleged weapons of mass destruction, the stated reason for war, but stated that “Saddam was a bad man and we took him out”.

With less than a year left in office, the president is a largely isolated figure. Most of the neo-conservatives who pressed him to go to war have been retired with honourable discharges and huge payoffs.

The fragile multinational coalition Bush put together has also largely disappeared, with countries having either abandoned the war or left token forces behind.

George W Bush has caused the greatest military disaster in US history and has brought the US to its knees financially. He will be remembered by the historians as a liar, a thief and most of all – a coward.