From Brown to Yellow

Yesterday our Supreme Comrade Gordon Brown hailed the Vision of Change that is sweeping our great nation.

The supreme leader’s speech was broadcast from the Ministry of Information’s broadcasting headquarters in Whitehall. The speech began with the Supreme Comrade awarding every Prole in Britain an increase of sugar rations consisting of two lumps per month, commencing from January 2008.

“Comrades, I have presented my considerations to you. I repeat that it is in the interest of the UK, the workers’ homeland, that we do not venture into Capitalist territory with frivolities such as Free ‘Democratic’ Elections. It is essential for us/Everything should be done so that my supreme Comradeship drags out as long as possible with the goal of permanent Unelected rule. For this reason, it is imperative that we agree to conclude the One-Party System proposed by my Supreme leadership, and then work in such a way that this One-Party System, once it is declared, will be prolonged maximally. We must strengthen our economic/propaganda work in the controlled media, in order to be in supreme power and control for as long as the New Vision of Change declares.”

After the momentous speech was delivered, 25 traitors were led away by the Politburo for questioning. The rest of the assembled Prole crowd applauded our supreme leader and showered his podium with empty vote slips.

The new directives applied by Supreme Comrade Brown will involve unelected leadership until 2009 when the European Union will take over full control of the UK, and there will be no need for ‘unelections’ ever again. The election of the now discredited Comrade Blair in 1997 were the last elections Britain will ever have. All party officials and Politburo members who adhere to the Supreme leaders Ideology of Change will remain in office. Revisionists and subversives in our society who propose failed systems like ‘Democracy’ will be despatched to gulags in Northern Britain. 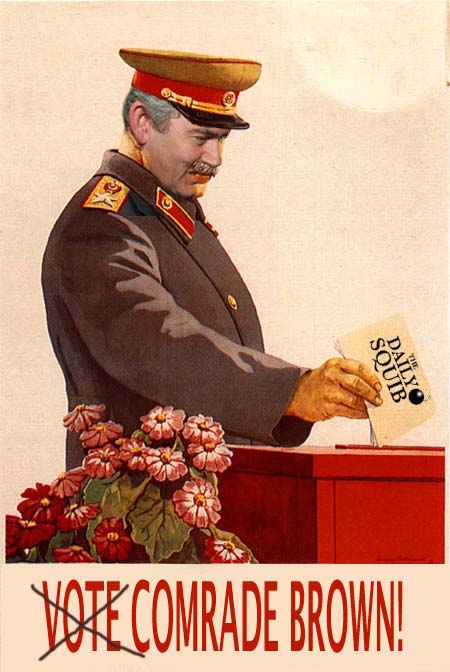 “In the past we had no fatherland, nor could we have one. But now that we have overthrown capitalism/democracy and power is in our hands, in the hands of the people, we have a fatherland, and we will defend our dictatorship state. Do you want our socialist fatherland to be beaten and to lose to Democracy? If you do not want this you must put an end to its backwardness in the shortest possible time and develop genuine Bolshevik tempo in building up its socialist system. There is no other way but for the Proles to give me, Supreme Comrade Brown, full control over every aspect of your ‘worker bee’ lives.”