The 10.32 from Manchester central was all fun and games today when a fifteen year old boy who has already been awarded nine ASBO’s added one more to his trophy cabinet.

The Home Secretary flew into Manchester personally to award the boy his ASBO and also rewarded the youth with an all expense paid trip to Disneyland in Florida in recognition for ‘shooting skills with an AK-47 rifle in a public space’.

The jubilant winner has been named as Kevin Sponger of Moss Side, Manchester.

He was initially spotted by an elderly woman who was shot at with the AK-47 assault rifle, only to be grazed on her ankle by a barrage of machine gun fire. After replacing the spent magazine the boy continued demonstrating his amazing shooting skills by picking off a station worker from 235 yards to jubilant applause from his fellow ‘chav scum’ friends.

A Greater Manchester Police (GMP) spokesman said: “Based on the information we had at the time, a careful assessment was made by a senior, experienced officer as to whether they could leave urgent paperwork relating to minor traffic offences to pursue a real crime.

“As there was only two shooting victims and no traffic speeding offence it was decided that an ARV (armed response vehicle) was not necessary.

“However, as a precaution, community support officers were sent to monitor the scene from afar and let the criminal walk away.”

Manchester, which is renowned for teenage gun play, is now winning the ‘city death league’ with an average of 153 fatal shootings per day. Lagging behind is Liverpool with only 85 fatal shootings a day. 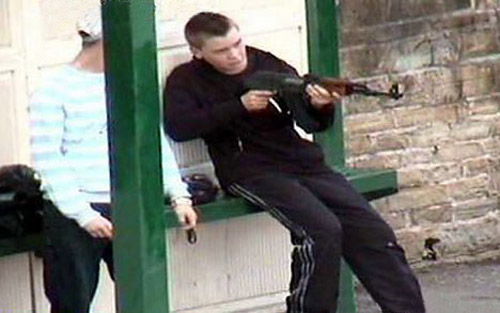 Colombian police officers on a fact-finding mission to the UK last month spoke of their fear that their country may end up like Britain.

Chief Inspector Sosa from Cartagena said, “I am in awe of Britain, it is a war zone there. How do your police deal with the deaths and mass crime sprees?”

The British Police officer who was meant to oversee the visit was not available for comment due to an engagement with a desk and about 250 forms to fill in for a petty shoplifting offence.

The AK-47 (Avtomat Kalashnikova 1947) is an assault rifle used in most Eastern bloc countries during the Cold War.

It was designed by Mikhail Kalashnikov and was one of the first true assault rifles due to its durability and ease of use. It remains the most widely used assault rifle.

The AK is simple, inexpensive to manufacture and easy to clean and maintain.

Its ruggedness and reliability are legendary and has been adopted by British youth gangs for this very reason.

Britain’s porous borders have allowed a roaring trade in the AK-47’s which are smuggled in from the former Eastern bloc.

The assault rifles can be picked up for as little as £70 in a pub car park somewhere and are increasing in popularity daily, dropping prices even further.