Thugs across Britain who have been carrying out a daily violence festival of hatred have voiced their fears on new proposals by Jacqui Smith the Home Secretary to make them sign a contract guaranteeing they change their ways and embrace good behaviour.

The new Acceptable Behaviour Contract (ABC) proposed by the Labour Government is aimed at quelling the mass murder and gun/knife killing spree that is happening on Britain’s streets every day.

The word on the violent streets of Britain from the thugs is that it is working.

Jacqui Smith’s wonderful ABC’s plan is a profound miracle amongst the gun-toting hoodie maniacs that are terrorising everyone.

The Daily Squib has had exclusive access to some of the hoodie thugs that are now blighting good ol’ Blighty.

Out of England’s 10,689 violent teenage gangs only one was prepared to speak to us – The Scrotes Boys of Manchester who have a massive following of 500 odd children/teenagers ranging from 9 years old to 18.

“We shot people for fun, innit! If someone called the cops they get done. School for me was the street ‘n’ I seen and done many boys, we jacked them cuz they crossed us.” These are the words of Pete K who was the regional gang leader for this area. He also explains what happened if other gang members entered his area. “If they get out alive then they was unlucky cuz we take down everyone then.” 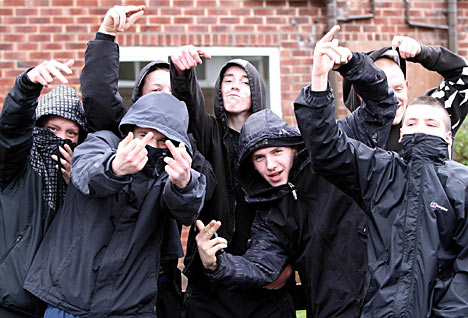 After the teen gang members are given an ABC they are also given an mp3 player and a safari holiday trip of a lifetime. The Home Office says this is to encourage young offenders and murderers that crime does not pay.

We ask the gang member what he thinks of signing a contract to curb his behaviour and violent ways. “I was violent and I jacked alot of kids in my time but when I signed my ABC I was a changed boy.” The ABC contract seems to have worked with him and he is now working for local Government as a councillor. Even though he could not read or write since signing the contract with an X, he has made a remarkable turn-around and all this thanks to Jacqui Smith’s ABC contract.

BBC report about the Scrotes Gang

ABC is truly a miracle cure indeed for the gun-toting, knife-wielding, knuckle-dragging Neanderthals that are plaguing the streets of Britain.

Since Jacqui Smith has introduced the amazing ABC contracts, crime has been reduced by 995% in the UK and over 3.9 million pieces of heavy weaponry have been handed in to Police Stations.

“After I introduced ABC contracts all crime has dropped dramatically. We can now walk down our streets without being violently maimed, shot or stabbed,” Jacqui Smith tells the Squib.

The Metropolitan Police who have been attending to highly prioritised duties such as paperwork, internal equality monitoring and conducting health and safety assessments for officers likely to be caught in a crime situation, are understandably too busy to realise the efficacy of the ABC but will address the issue after a draft fact-finding white paper is issued later on in the week.

Jacqui Smith MP : “The ABC contract ensures that crime is halted in its tracks. Once they sign the piece of paper that means they have to stop the mass killing and looting, drugs and burglary or they will be in trouble and receive an ASBO after 12 months of supervision.”

It seems the ABC has made Britain safe once again and we can now all thank the Labour Government for their wonderful crime-fighting policies.