“Never before have we seen such amazing intelligence and it is all down to the Labour commitment to education. Young people in the UK are achieving even higher grades than anywhere in the world or at any time in the history of education.”

Only five people in the whole of the United Kingdom failed to gain an ‘A grade’ on the A-Level exam this year. This is a wonderful day for Labour spin, but a sad day for legitimate qualifications.

Since Labour has come into power the standard of A-Levels has dropped to such a low level that many private schools are considering dumping the dumbed down ‘qualifications’ for a rival qualification that will test pupils properly.

The current A-levels were watered down by controversial reforms to A-levels seven years ago which split the exam
into six bite-sized units examined in stages throughout the course,
with potential for repeated resits. The Labour government has thus created a false grade system where even the thickest students can take the exams and get ‘A grades’.

Not only have the A-Level exams been dumbed down to the level of a low-intelligence test, but the pass marks for ‘A grades’ in the A-level have also been lowered so more students reach the A threshold.

In the 50’s up to the late 80’s, A-levels involved students be tested by sitting exams and writing actual essays. A pass mark for an A grade was substantially higher than today’s ‘mickey mouse’ qualification.

The result of the Labour governments spin operation on the A-levels is that there are a large number of people leaving school with ‘A grades’ who are actually not qualified in their chosen subjects. 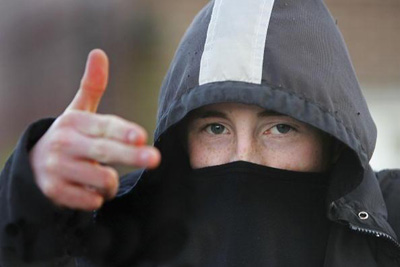 Universities have a very hard time because they are receiving students who are deficient in basic grammatical and mathematical skills, let alone the higher knowledge base that should be attained at A-Level.

The further avalanche effect thus extends to employment where the new ‘A student’ graduates are illiterate, ineffectual and just plain deluded at their false qualifications.

Despite the majority of graduates all having A grades at A-Level, universities are now having to re-train students in the basics because of the inferior education levels that they have received.

The A-level is now synonymous with deception, dishonesty, Labour spin and fabrication.