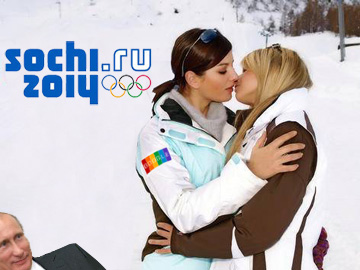 Two slalom skiers, one from Russia and one from Austria, were caught kissing sensually on the slopes before the competition, winter Olympics officials revealed.

One of the judges for the skiing competition, Igor Rasputinski revealed the racy details: “It was a gorgeous day, the sun streamed through the trees warming us. I was on the top of the slope and Olga, a very beautiful skier who was about to race, bent down to check her ski boots, when she looked up again she must have caught the eye of this fantastic looking Austrian girl. They immediately said a few words before they enjoyed a very sensual French kiss which went on for six minutes thirty two seconds, I was timing it. They looked in each other’s eyes again, then Olga went down the slope joined later by Andrea the other skier. I had to go and have a long cold shower afterwards, not out of my choice but because there is no hot water in the hotel showers in Sochi.”

The two skiers went on to win joint gold medals and were cheered by the joyous crowd.