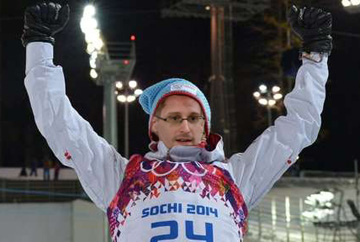 Cheered on by the crowd, when he got to the bottom with a near perfect landing, he raised his hands in triumph at his amazing jump in the Sochi Winter Olympics event.

After the qualifying round yesterday, today’s jump beat all the competition.

Team NSA (USA) had to contend with a silver medal but they were consoled by the fact that they were able to extensively bug the hotel rooms in the Olympic village and even managed to put a tracking device under Vladimir Putin’s shoe.