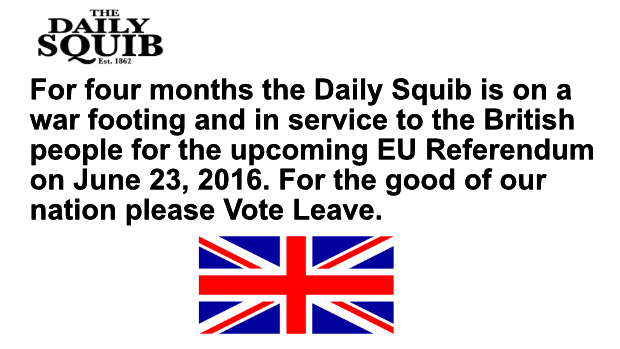 Vote Leave has today launched 50million.uk, a competition to win £50 million – the amount of money we hand over to the EU every single day.

The competition is free to enter and involves the public using their skill and judgement to predict who they think will win each game of the 2016 European Football Championships this summer.

If they predict the outcome of each game correctly, the line up at the knockout stage, and all the games including the final then they will win £50 million. If no one predicts all the results then there is a guaranteed prize of £50,000 for the person who gets the most consecutive games correct from the first game of the tournament.

The competition is open to any member of the public who is over the age of 18 and is registered to vote in the EU referendum. How someone votes in the referendum or whether they even vote is irrelevant to whether they can enter and win.

Vote Leave is funding the £50 million prize via an insurance policy taken out with underwriters at Lloyds. The competition is based on a similar competition run by Warren Buffett based on March Madness basketball in the US. 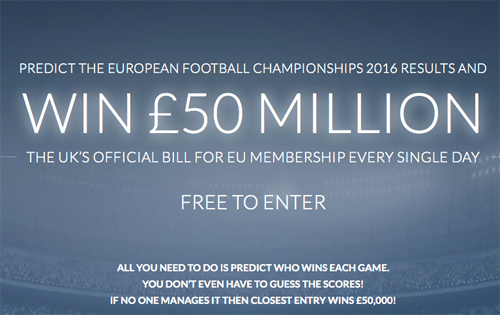 ‘Every day we spend at least £50 million on the EU – that’s £350 million a week which is enough to build an NHS hospital. We want as many people as possible to know that we are sending life changing sums to the EU every single day so we’re giving them a chance to win it. It’s a bigger prize than any one person has ever won on the national lottery.

‘This is the chance of a lifetime – just imagine what you could do with the £50 million we send to the EU every single day. We want everyone to have the chance to win the sort of money most people can only dream of, unless they are a banker or a Euro MP.

‘Too many people, particularly younger voters, don’t engage in politics and do not plan to vote in the referendum. For years there’s been a lot of talk about this problem but it’s got worse. 50million.uk is an attempt to engage with large numbers of people who normally ignore politics. We’ll be able to speak to them about the issues, give them some facts, and answer their questions.

‘We’re big underdogs in this campaign. The Government sets the rules. We don’t get millions from the big investment banks and we can’t spend millions of taxpayers’ money like the IN campaign. We have to innovate. If you want to win the amount of money that British taxpayers spend on the EU every single day, take a shot at our competition and spread the word to family and friends. After we Vote Leave and take back control, we’ll be able to spend the money we now waste on the EU on our priorities like the NHS.’