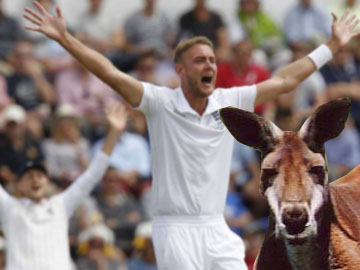 Up first was Stumpy, he doesn’t have any legs but can swing a bat slightly and he croaks like a toad when he’s annoyed. LBW and he’s off.

Next came Skippy, he’s a kangaroo and can only jump up and down, sometimes dinking the ball outside off with his swishy tail. Generally, he just likes to eat grass.

Then came Matilda, waltzing to the left, to the right, fresh out of the billabong, he slogs a blinder going hard at the ball inside edge but falls foul at the third slip just short of what he thought was a coolibah tree, which in reality was an oak.

Billy the sheep farmer didn’t fare any better by cocking one off the splice fresh out of the dip and into the wide open pen.

Won’t go into the rest but what a moment for Stuart Broad and England.