Russell’s got his little Booky Wook out and notched off another continent that he has nearly conquered. Going from strength to strength this winker has got his sights on getting his winky out and conquering the whole winking world.

“I remember Russell winning the championship. He was a real tour de force and no one could stop his Winking mania. He was a wee lil winker and won the Silver Wink semi-final between Grays and Dagenham after 5 hours 20 minutes of play,” Johnson Subbuteo, ex-Tiddlywinks world champion told the Daily Squib.

Russell has been playing with his winky ever since and has even written a few booky wooks detailing his winker techniques and the wonderful tales he recounts of his winky world adventures.

Dipping the Wink in the Pot

“I first realised I was a winker when I completed a double-squop at my first competition and saw that wink drop in the pot winning me the competition and scooping me the prize of 35 pence. From then on I couldn’t go a day without ploinking my tiddly in a pot,” Russell told Winking World, the official journal of the English Tiddlywinks Association.

It was only recently that Russell got his end away with the American Winky contingent and he has been winky deep ever since.

The jealous American border authorities actually attempted to bar him from re-entry into their territory because he was seen as a threat to their tiddlies.

“George W Bush may have personally ordered the barring of Russell Brand from America’s borders because he was seen as a threat to American supremacy in the Tiddlywinks world. If President Bush allows Russell in, then everything the Americans have ever worked for could be lost for ever – it would be a bloomin’ disaster for ’em,” Reg Cockwaith of the West Glamorgan Tiddlywinks Club says. 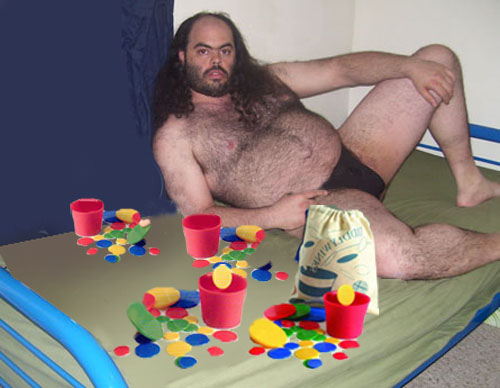 Russell Brand was recently photographed at his Los Angeles ranch-style
Beverly Hills mansion posing with his collection of Tiddlywinks.

“It’s as if he’s digging for gold such is his ferocity and passion in winking. I’ve seen him go from one wink to another in less than a minute, he drills away with his tiddlies and squops in the pot like a man obsessed,” grandmaster Tiddlywink Sensei Alan Pounder writes in the June ETA edition.

According to Russell he has no colour preference for winkies and treats them all the same.